It happens at every sporting event. It is the greatest expression of American patriotism — singing the U.S. National Anthem. Those who perform it carry the honor and glory of their performance for a lifetime. While it will not be televised, Saturday’s presidential debates will begin with the singing of the National Anthem by Saint Anselm student David Kimbell ‘09 (Nashua, N.H.). A founding member of The Acafellas, the premiere Saint Anselm College barbershop quartet, Kimbell is a tenor in the Saint Anselm College Choir and a philosophy major. Our very own Katelyn Tustin ‘09 had an opportunity to sit down with him. Music is by The Acafellas: David Kimbell ‘09, Anthony Vercollone ‘08, Joseph Bissonnette ‘08, and Greg Macksoud ‘08.

A Semester in Paris

Lauren Weybrew ‘08, a frequent blogger and podcaster on this site, studied abroad in Paris, France during her spring 2007 semester. During her five months in Paris, she blogged about her experiences for our admitted student online community. She recently produced an audio slideshow about her Paris experience and has made all of her photos and blog posts available through the college Web site at www.anselm.edu/parisblog. 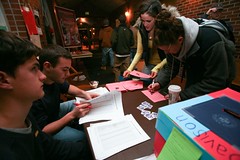 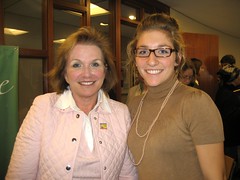 On a crisp November morning, bloggers from across the region convened at the New Hampshire Institute of Politics for a conversation with Elizabeth Edwards. As a long time blogger and the wife of Democratic presidential hopeful Senator John Edwards, she had a lot to say to the group of 30 or so bloggers that morning. Elizabeth casually walked into the room, saying hello to the bloggers she was familiar with, knowing most of them by name. The way she came into the room, without any cameras or staffers following her, surprised the group, and she instantly received the applause she deserves.

Before she sat down, a few young campaign staffers hung up a sea-foam green sign behind her seat with cursive “New Hampshire ‘Hearts’ Elizabeth” — a perfect reflection of the feelings of her audience that morning. 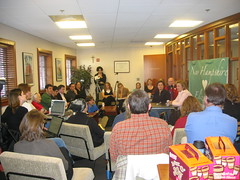 Elizabeth was very down-to-earth, and very relatable, drinking her Diet Coke and making sure all the bloggers were ready and their equipment was set up correctly. She began the meeting by saying a little bit about technology, and the large impact it has on society, especially the upcoming presidential race. Elizabeth mentioned how she has been using the internet ever since it’s first appearance, and was a veteran to the blogging community. I had never realized how much blogs impacted the political community, so this was interesting for me to hear. She even talked about how she likes to post on the lesser known blogs, to show her appreciation for their support.

After a short speech about blogging, she opened it up to questions. Many of the questions pertained to the blogosphere, but others talked about her husband’s campaign. Elizabeth talked about her love for blogs, as it allowed anyone and everyone to have a voice about the presidential race. She also discussed blogs that focused on education, which lead to a chat about home schooling her youngest children, Jack and Emma Claire. The examples she gave of their home schooling regimen shed light on her hands-on approach to educating her children, and the strong emphasis on parenting from both her and Senator Edwards.

At the close of the event, Elizabeth graciously thanked everyone for coming and stayed around for additional questions, photos, and anything else the blogging community needed. She was a blogger’s dream, catering to each of our questions, and she likely returned home to her own computer to respond to each of them.