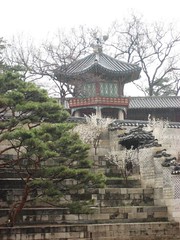 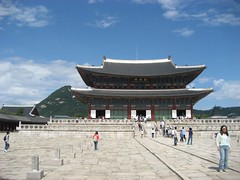 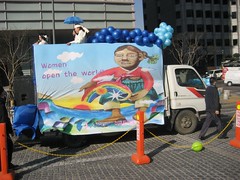 In America March is Women’s History Month, but in much of the rest of the world, March means International Women’s Day.  On March 8, 1908 15,000 women marched through New York City to demand shorter working hours and better working conditions.  In 1911, a German woman launched the first International Women’s Day in Copenhagen, Denmark to demand equal rights for women.  Since then this has been an international celebration not of women’s past, but of their present status, needs and hopes.

This year marked South Korea’s 24th International Women’s Day celebration and my first.  I joined 5000 other people and 167 women’s groups for an information fair, concert, ceremony, and parade.  Foreigners were invited to wear purple and white (the colors worn by US suffragists).  I ended up marching next to another Fulbrighter, an English teaching assistant.  We were warmly welcomed, handed pinwheels and balloons and coached through the Korean cheers.  In a crowd wearing purple hats, carrying blue umbrellas, waving bright red “No human trafficking signs”, or trailing green and yellow streamers, for once no one had eyes for the white face in the crowd! 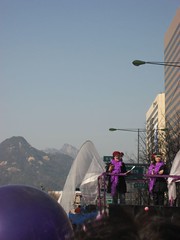 The guests of honor this year were the women and volunteers of Sharing House.  This organization was created to house, care for and honor the Korean women who were kidnapped during World War II and forced to work as sex slaves for Japanese soldiers.  For decades they were abandoned by their families and shunned by society, but in the past ten years there has been an outpouring of support for them.  Some of these women and their supporters have protested in front of the Japanese Embassy in Seoul for 800 straight weeks, demanding an apology and reparations.  Recently the US passed House Resolution 121 calling on Japan to apologize, which was not welcomed by Japan.  You can learn more at http://comfortwomen.wordpress.com/  or http://war_forgiveness.soundprint.org/ .

Women’s status in Korea is remarkably similar to that of US women in the 1980s. Laws for women’s equality are on the books, but popular attitudes have not caught up.  Rapists often escape punishment on the argument that a woman wore revealing clothing and thus incited the man to rape.  Victims of domestic violence are assumed to have acted in a way that provoked violence.  There is an increasingly sharp split among women as well, best shown by the contrast between “golden misses” (single, highly educated, highly paid urban women who disdain marriage) and “golden egg mothers” (rural, uneducated, farm wives who have third, fourth and fifth children to reap the benefits provided by a government desperate to fend off a future worker shortage by increasing the lowest birthrate in the world). 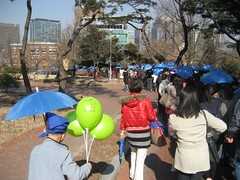 In some ways, Korea is way ahead of other countries.  A 2004 law criminalized the prostitution of women, providing punishments for “johns”, “pimps”, and “procurers” rather than women forced into prostitution.  It also provides mental and medical health care, empowerment and vocational training, and guaranteed jobs for women who choose to leave prostitution.  Advocates say simply changing the language from “prostitute” to “prostituted woman” and from “morally degrading behavior for women” to “morally degrading behavior for men” makes a huge difference.  This is especially true in a nation where red light districts are still highlighted as tourist destinations and both government and business officials continue to see providing a sexual partner for clients as part of the deal-closing culture.   Then again we have Eliot Spitzer. 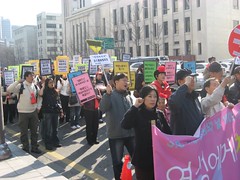 Listening to Koreans talk about women is fascinating.  Most women complain about the “double shift” of working full time and having sole responsibility for home and family care.  The Korean tradition of building bonds at work through 5 hour long drinking rounds after work tends to automatically exclude married women.  Women only make 63% of a male salary for the same job.  (The number in the US is 78% and in Europe it is 90%).  Korean Men however talk about how there are more women in college than men, women are excused/excluded from military duty, and they are perceived as better at learning English and thus getting better jobs.  Women think they have made only small progress toward equality.  Even with legal requirements that women fill half the spots on party ballots, there are few prominent female political leaders in Korea.  Yet men feel strongly that they are losing power and that women are running the country. 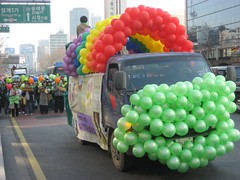 These differences actually show up in the two major political divisions in Korea.  The former “liberal party” President created a Ministry (Cabinet level post) of Gender Equality and the Family.  The name implied attention to both male and female issues.  This was a crucial realization, since there had previously been little discussion about the problems of men in Korean society. Why do some seek out prostitutes?  Who will rural Korean men marry when more and more Korean women reject marriage?  Already rural counties are more multicultural than the cities as male farmers import wives from the Philippines, Cambodia and Vietnam - into a nation that has long valued its racial homogeneity!  However, the current President tried to eliminate the ministry altogether, and settled for downsizing it and changing its name to the Ministry of Women.   This implies that women are getting special treatment, and it will likely doom the ministry’s effectiveness here.  President Lee’s 24-7 “pragmatic, responsive” government is also causing women (and men) to resign from government service.  Being constantly on call for government needs leaves little time for family needs. 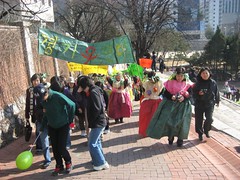 For all these reasons, women and men paraded through central Seoul, carrying signs, shouting slogans, and singing songs.  They celebrated what has been accomplished and they demanded attention to continuing problems.  I did not always understand the language, but I understood the point.  And I was glad to be there.