This is a “just in case you were worried” public service announcement.

Bird flu is spreading rapidly among poulty in South Korea at the moment.  The latest outbreak is in my town, on an isolated chicken farm.  The national alert level has been upgraded from yellow (alert) to orange (alarm) and all poulty within three miles of an infected farm is being slaughtered by members of the Korean army.

While the strain of bird flu is the most virulent, and the only one known to infect humans, there is extremely low risk of anything happening to me.  You really need to be a chicken farmer to be at risk.  There is a poultry farm on my daily walk, but I am avoiding it.  It does not have any birds at the moment.  I am avoiding all food with raw eggs, and ensuring that any eggs I do eat are cooked to over 164 degrees F, the temperature that kills the bacteria.  This is also true for chicken.  I am also, just in case, avoiding all the cats in my neighborhood, since they eat raw birds when they can get them and can be a disease carrier.

We now return you to your previously scheduled activities, hopefully without worry.

Just in case you missed it….

A few readers who get the blog delivered by e-mail missed the last couple of blog entries.  There seems to have been a technological difficulty.  The last four blogs were:

Globalization One Bus Trip At a Time (foreigners in Korea)

If for some reason you missed one, they are all available at http://blogs.saintanselmcollege.net/bethsalerno .

This is my 50th blog entry.  Starting today I have exactly three months left in my adventure.  Thank you as always for reading.  It is nice to have company on adventures.

After I posted my blog entry about celebrating my birthday, I got a bunch of concerned e-mails.  People were worried that I must have been lonely eating cake by myself in the evening.  Actually I had had such a busy and enjoyable day at graduation, cake by myself was a decadent, reflective way to end the day.  However, should anyone still feel I was somehow cheated of a proper celebration, I had one today.

The mail brought a package filled with thoughtfully chosen presents from a group of colleagues in New Hampshire.  What amazing people!  As I opened things, people kept stopping by; today was the first day of registration for students and all faculty were on campus, working and visiting.   Opening presents became a bit of a group event.

I had previously arranged to go out to dinner with more Pyeongtaek faculty, and they turned dinner into a birthday celebration.  Afterward we went to norebang (karaoke in private rooms) and I got the Happy Birthday song in both English and Korean.  A friend had baked cinnamon cakes and spelled out “Happy B-Day Beth” in sugar stars and red and green sprinkles.  We filled the norebang with song, including Take Me Home Country Roads, The Power of Love, Sloop John B, My Way, Three Times a Lady, Uptown Girl, Somewhere Over the Rainbow, Johnny Guitar, Hotel California and a number of Korean hits.  I still have not managed to learn a song in Korean, but two students have promised to try and teach me so I can sing in Korean before I leave.

As has often happened during my time here, I am a bit overwhelmed by people’s generosity of spirit and gifts of friendship.   If all my birthdays are like this one, I am going to thoroughly enjoy growing older.

Second Half of Interview Now Available 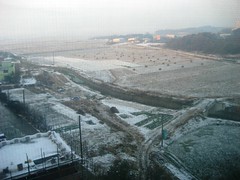 Time is passing quickly.  Today was the first day of my fourth month in Korea (I have finished exactly 1/3 of my appointment).  It was also the first snow of winter, an icy, crunchy inch or two that melted off by noon.

The second half of my podcast interview is now available at http://blogs.saintanselmcollege.net/2007/11/18/bethsalerno-part2/.  In it I talk about the relationship between North and South Korea, how my experience here will impact my teaching, and the reasons you should come touring in Korea.  My husband Tod and my two cats get their 5 seconds of fame as well.

Interview with me now available as podcast

Recently a Saint Anselm College student, Lauren Weybrew, did a great job interviewing me by phone about my experiences in South Korea.  She has edited the interview into a podcast.  The first half of the interview is now available at http://blogs.saintanselmcollege.net/2007/10/26/bethsalerno/ .    You can play the file on your computer or download it to an MP3 player.    The second half of the interview will be available next week and I will post a link here.

It is 3:30 Tuesday morning in the center of Seoul, but my body thinks it is time to be up. In New Hampshire it is 4:30 pm (correction: 2:30 pm - Korea is 13 hours ahead) and many of you are thinking about what is for dinner, while I am wondering whether I’m having kimchee and rice for breakfast! Someday I may get there, but right now a blueberry muffin, a glass of milk and some yogurt sound awfully good.

It was a long trip “yesterday” which actually began at 3 am Sunday when I got up. My travel schedule included a 4 am trip to Manchester airport (I didn’t even know they opened that early!); 6:10 flight to JFK airport in New York (people are remarkably friendly when they share a 6 am flight); 6 hour layover in JFK (what an amazingly HUGE airport); and a 14 1/2 hour flight from JFK to Incheon International Airport outside Seoul.

I can highly recommend Korea Air to anyone who wishes to travel to Asia. When I recently traveled to Hawaii on an American low cost airline, pillows, blankets, headsets, meals and even snacks had to be paid for a la carte. On Korea Air I had a blanket, pillow, headset, access to 37 movies, 100 music channels, televisions shows, news, games and other options in Korean, English, Japanese and Chinese - all on demand with my own personal screen. On what other flight could I watch a traditional Korean melodrama and Casablanca back to back? Not to mention being fed about every three hours with food that was actually worth eating and for those who wished, regular infusions of white or red wine.

I am currently housed in the Fulbright Building. The Korean American Educational Commission is the only bi-national Fulbright Commission to own its own building. I expect tomorrow to be busy as I meet the staff and fill out paperwork (with a highly likely middday nap!). By late afternoon, I and my four suitcases (how do you pack a year of your life into 137 pounds?!) will be on the train to Pyeongtaek, my final destination.

With luck once I am settled in I will post some pictures of the area and apartment. Today I just wanted to reassure all friends and family that I have arrived and the adventure continues.

Introduction: Information for the Curious

Hwanyŏng (welcome!) to my South Korean Fulbright blog. I have not left yet, but I wanted to test out the site by posting an opening message.

My departure date is August 19th, 2007. I am already both excited and homesick. I have spent much of the summer saying goodbye to people, learning basic Korean culture and language, and packing up my belongings. Kamsa hamnida (thank you) to everyone who has been supportive of this year-long adventure. Your encouragement has made it both easier and harder to leave.

Many of you have asked about where I will be teaching in Korea. I will be at Pyeongtaek University, which was founded in 1912 as a Protestant missionary school. It reinvented itself in the 1990s as a national Korean university and its main focus is the creation of global citizens. It has one of only seven American studies programs in the country, which combines the teaching of English with American history, culture and politics (like a French or Spanish major in the United States). All the American Studies Faculty speak English and my courses will be in English. My fall class is Race and Gender in American Society.

The English language website at Pyeongtaek is a little short on basic details like how many students attend. This has made it tough for me to get a sense of the place. However you can get a sense of the history and vision of the school at www.ptu.ac.kr/english/main1/main4.asp They clearly value international perspectives.

For those of you with high speed connections, check out the interactive campus map at the above address. You can click on any building on campus and get a 360 degree view of the campus from that spot. You can also tour the inside of some buildings. I do not yet know which building I will be in, but the International Center and the Humanities and Social Sciences Building are my best guesses.

The city of Pyeongtaek is smaller than I had been led to believe – about 400,000 people. 10,000 of those residents are foreigners (probably due to the presence of a major shipping port, a large American military base, and the University). Pyeongtaek is on the western coast of Korea, about an hour south of Seoul. It is part of a large, flat plain in one of the main agricultural sectors of South Korea. I am told that my University apartment building overlooks extensive rice paddies.

For those who want to know more about the city, please click this link to Pyeongtaek city’s English language website: www.pyeongtaek.go.kr/pub/eng/index.jsp . The “City Guide” section is the most helpful. You can check out the museums, botanic garden, food traditions, and cultural resources. I am sure you will hear more about most of these in future blog posts - especially the food. It may help to know that Korea has cataloged all of their cultural resources, ranging from historic sites (tangible) to pottery glazing techniques and types of dance (intangible). The resources in the Pyeongtaek area are listed under the “cultural resources” section.

I hope to be posting new web log entries once a week once I arrive in South Korea. You are welcome to check back any time and all the entries will be here. If you would like to receive new postings by e-mail, this web log program has a handy “sign up” feature. In the right sidebar of this blog page under the subscriptions section, there is a sign-up box. Simply enter your e-mail address. You can unsubscribe at any time.

Thanks for reading, and I will post next when I arrive in Pyeongtaek!