Koreans have a “beef” with America 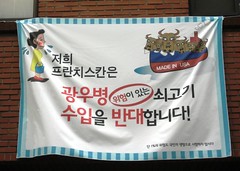 I am beginning to understand what people meant when they told me “Anti-Americanism can flare up in Korea in a moment.”  I am also realizing anew how huge a gap there is our “international” news coverage in the U.S.

Many of you probably know that Korean President Lee Myung-bak visited the U.S. in April.  It was the first time an American President invited a Korean leader to Camp David.  Both President Lee and President Bush would like to see the Korean-US Free Trade Agreement passed and both face an uphill battle in their Legislatures.

You may not know that Korea and the US signed a controversial beef import deal right before that visit.  Korea used to be the third largest importer of US beef.  Then mad cow disease hit one cow in the Pacific Northwest.   Korea limited imports to beef without bones.  About a year ago, they stopped imports altogether when they kept finding banned bones in U.S. shipments.  The new deal was supposed to reopen the lucrative Korean market and drive down amazingly high beef prices here.  I have paid $12 for a small, ordinary steak. 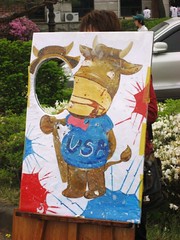 Since then, there have been growing protests.  First they were protests against potentially dangerous U.S. beef.  I noted in an earlier blog that I had to answer questions from students about whether I ate beef and was it safe.  Then some of the protests became anti-American government protests, as people felt the beef deal was a “give-away” by President Lee to the Americans in order to get the Free Trade Agreement passed.

Now the protests are strongly anti-President Lee.  The beef deal was one more action by a President apparently deeply out of touch with the people who only 4 months ago voted him into office by a wide margin.  His approval ratings are hovering at the 18% mark!  Images of black-booted young policemen kicking fallen protestors have only heightened the tension in a nation which still vividly remembers military dictatorships.

Yesterday I was in Seoul to say some goodbyes and passed two separate protest marches.  One building had a banner depicting sick cows “Made in USA” and a worried consumer.  The subways had advertisements for Australian beef :  “Clean & Safe”. 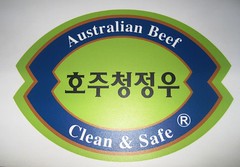 I feel perfectly safe, especially since I do not live in downtown Seoul.  No foreigners have been targeted, and the anger is clearly directed at the government - especially the Korean President and the U.S. Ambassador.

This coming Tuesday is the anniversary of massive nation-wide protests against Korean dictatorship and there are expected to be rallies and marches all over the country.  I expect people at the University will be mostly apathetic - it is final exam week.  But I’ll be avoiding Seoul, just in case.

I will also be curious to see what turns up in the U.S. newspapers.  Part of my goal in coming to Asia was to understand how people in other regions viewed the United States.  Now I understand a little of that.  I am also far more aware how much international news never shows up in the U.S. media, even when it directly relates to U.S. interests.  There is only so much bandwidth, and Clinton and Obama take up an awful lot of it.  Everyone here knows about Clinton and Obama.  How much do people at home know about Lee and U.S. beef?