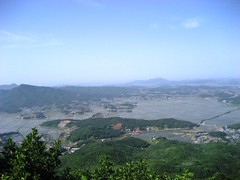 This past weekend the 15 year-old daughter of two Korean colleagues and I went to Gangwha and Seongmodo Islands. These are at the mouth of the Han River, an hour west of Seoul.  We had many adventures and learned a lot of American History (some of which will appear in the next blog entry).  This entry however could have happened anywhere - and according to my family, often does.

We were walking through a glorious patchwork of rice paddies and vegetable gardens, under a bright blue sky, along a swift flowing river.  We were talking and wondering how far we had to walk to get where we were going.  Over time we noticed thousands of black “beans” on the walkway, which smeared when scuffed by a shoe.  We agreed they looked like animal droppings.  Soon we saw hoofprints in the mud, and Hee-min tried to describe the animal that made them. 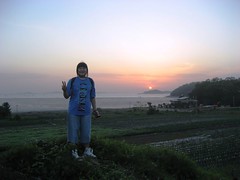 “It’s not this,” she said, miming a large animal with big attachments on its head.  “No, it is not a moose” I agreed, “more likely a deer.”  “Yes,” she affirmed, “we have deer here like the one in the movie by Disney.”  “Bambi?” I asked.  “Do you realize Bambi was a baby deer in the beginning? He got a lot bigger.”  “Oh,” she replied, “well these deer stay the size of Bambi, they are brown and soft, and they live….”

At that moment we all but walked into a large black thing and we were so startled we were lucky not to fall into the river or the irrigation canal.

“Baaaaa,” it said, staunchly defending the three littler black things prancing about behind it.

We gave Billy Goat Gruff a wide berth and hustled by until we were beyond the length of his tether.  Then we laughed at our inept mystery-solving skills and continued on through the rice fields, until we met the next adventure.