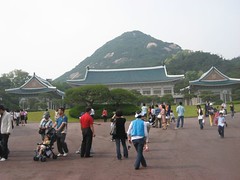 In my American Political Culture class, I have been trying to use lots of examples from Korean politics to help explain America’s politics.  This has had mixed success. Like most Americans, most Koreans have limited knowledge of their own political system. But we are learning together.  So here is a primer for all of you wanting to know about Korean politics (and possibly needing a reminder about how our U.S. system is supposed to work):

Koreans have direct election of the president.  They do not have an Electoral College to moderate the potentially immature and irrational decisions of the voters (at least, that was the original idea of the Electoral College). 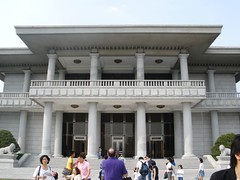 In addition, Korean Presidents serve 5 years (not 4) and cannot be reelected.  Koreans are even more eager than Americans ever were to avoid a dictatorial (or monarchical) President.  They do not, however, have the office of Vice President.  If something happens to the President, they have to have a national election to replace him.  They also have to have a national referendum to change the Constitution, rather than getting three-quarters of the states to approve the change.

Interestingly, Koreans did not have Presidential primaries until 2004.  They are still experimenting with them, combining votes by party members (less than 10% of the population) and cell phone public opinion polls.  They have dozens of political parties, which change with every election.  The oldest political party was formed in the 1990s. 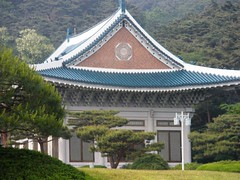 Koreans have a unicameral, not bicameral legislature.  This means they have one National Assembly, not a House of Representatives and a Senate.  Everyone serves four years, rather than 2 and 6 respectively in the U.S.  Whereas impeachment and trial are completely Legislative rights in the U.S., (The House impeaches and the Senate holds a trial), in Korea the Legislature impeaches, but the Judiciary (Supreme Court) holds a trial.

The Judiciary in Korea works much like that of the U.S. with two huge exceptions.  Korea has both a Supreme Court (for appeals) and a Constitutional Court (specifically to examine issues of constitutionality).  In addition, Korea does not have trial by jury.  As of January 1, 2008, the first ever jury trials were held in Korea, on an advisory basis. 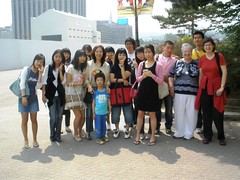 The Korean Constitution is many pages longer than the U.S. and infinitely more specific. (If you would like to read it in English, see http://english.ccourt.go.kr/home/english/welcome/republic.jsp).   It lists hundreds of things the government must do, but maintains flexibility by saying the government must do them “according to Act” or in other words, according to current law.  Therefore changing the spirit of the constitution can be as easy as changing the law.  Thus the amazing rights provided in the Constitution are highly contingent on law, whereas in the U.S. they are far more contingent on judicial interpretations.  Still, here are some of the impressive rights listed in the Korean Constitution and not in the U.S.

1)  All citizens shall be equal before the law, and there shall be no discrimination in political, economic, social or cultural life on account of sex, religion or social status.

3)  All citizens shall enjoy freedom of conscience.

4)  All citizens shall enjoy freedom of learning and the arts.

5)  All citizens shall have an equal right to receive an education corresponding to their abilities.

6)  All citizens have the right and the duty to work.

7)  All citizens shall be entitled to a life worthy of human beings.

8)  All citizens shall have the right to a healthy and pleasant environment.

One passage I find fascinating is directly under the rights of free speech, free press, assembly and petition (mirroring our First Amendment in the Bill of Rights).  Our Bill of Rights definitely does not have this clause:  “Neither speech nor the press shall violate the honor or rights of other persons nor undermine public morals or social ethics. Should speech or the press violate the honor or rights of other persons, claims may be made for the damage resulting therefrom.”  While the U.S. criminalizes slander (spoken defamation) and libel (written defamation), we rarely prosecute writers for undermining public morals and social ethics.  (Though we have in the past - McCarthyism comes to mind).

For this reason I find the Korean Constitution a fascinating mix of liberal beliefs (their statements about equality and rights far exceed those in America) and a conservative focus on social morality (placing the good of society above the rights of the individual.)  It is also, thus far, mostly a piece of paper.  The American Constitution has achieved an almost religious status, with politicians constantly referring to it to support their points or challenge their opponents.  A “Constitutional Right” is valued above all others.  In Korea, the Constitution has been amended a dozen times already, and is seen more as a guideline than an absolute standard.  In some ways, the Korean Constitution faces the same challenges the American one did when President Andrew Jackson supposedly said “The Supreme Court has made their decision, now let them enforce it.”  History teaches that our Constitution has not always been quite so sacred.  This is perhaps the most shocking thing to Korean students - and perhaps the most hopeful.