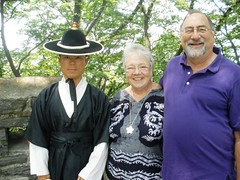 As part of their 40th wedding anniversary trip to Hawaii, my parents made a detour to South Korea.  As my mom noted, it was not the top of their “foreign destinations” list, but it had me, so that made it pretty attractive.  My parents have not left North America in 40 years, but they handled customs and immigration like pros.  Here are a few highlights from their trip:

1) A bus tour around Seoul (which meant _I_ finally understood how this city was laid out!). 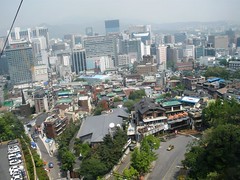 2)Dinner at a Buddhist restaurant which covered the table in small bowls of tasty vegetables and ended with traditional Korean dancing and drumming.  I was really impressed that my parents managed to sit on the floor for over two hours.

3)  Shopping in Insadong, a traditional (and touristy) shopping area.  My Dad commented that this was what he expected of “the teeming masses of Asia”- densely packed streets, crowded buildings, lots of alleyways crammed with shops, a profusion of brightly colored goods.  It contrasted sharply with the skyscrapers, elegant sculpture, large parks, and Rodeo Drives of modern Seoul.  There my mom noted “I have never seen this many Louis Vitton advertisements, even in America!” 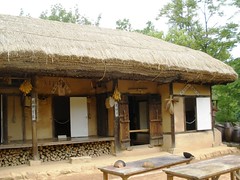 4)  Touring a folk village in Yongin.  We saw houses moved from various parts of the country, with rice thatch roofs, rice broom-swept courtyards, hand carved kitchenware.  It was hard to believe that my colleague’s grandparents lived in a home similar to these into the 1970s.  Change has happened really fast here. 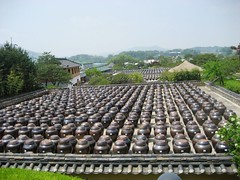 In six days, my parents had six kinds of kimchi and close to 100 different kinds of Korean food.  They were great sports, trying everything once, and finding they liked almost all of it.

6)  Meeting with students.  Due to a scheduling conflict, my parents visited the Korean Presidential Residence (Cheong Wa Dae or the Blue House) along with students from my American Political Culture class.  The students were outstanding ambassadors, providing translations of the Korean tour information.  My parents also attended my study group where students took full advantage of the chance to talk with foreigners who also happened to be Professor Salerno’s parents.  Meeting with English-speaking foreigners is still pretty rare in Pyeongtaek, so having three in a classroom was pretty special. 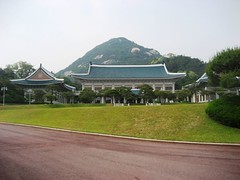 My parents enjoyed being elders in a country that has traditionally honored age (although that is rapidly and unfortunately changing).  I was fascinated to watch people who have always acted the “senior” role with me, suddenly acting the “junior” role with my parents!  It affects how people shake hands, pour drinks, drink drinks, and prioritize desires.  I think my parents liked best all the children who would come up to them and shyly ask “Where are you from?”  and then ask to have a picture taken with the friendly foreigners.  Many ran off giggling.

One interaction may serve as a summary for the trip:  Walking up the _steep_ hill to Namsan tower, my mom asked four middle-school girls what they were eating.  “Ochingo” one said, clearly struggling for the English.  “Squid” I translated and they nodded and giggled. 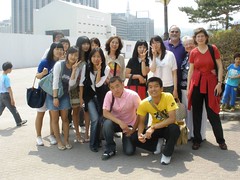 A huddled conference followed and the girls then offered their food to my parents. Remembering that it is impolite to reject offerings of food, my mom accepted and everybody smiled - a cultural interaction successfully negotiated.  Food, giggles, language, and culture on the way to a scenic view.  It was a great trip.