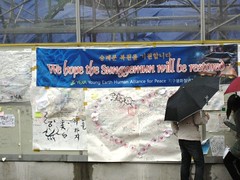 Koreans have also adopted many English words particularly in areas of technology.  Computer, printer and adaptor are simply pronounced a little differently but are recognizably English.  This is similar to America’s adoption of foreign words like lieutenant (from the French) and karaoke (from the Japanese).  This intermixing of languages led to a fun discussion one night when a Korean asked me for the American word for norebang (the practice of singing lyrics along with a soundtrack).  I said, “Karaoke”.  My colleague said, “No, the American word.”  I said “Karaoke”.  My colleague then turned to a friend and said in Korean, “Would you please ask her the American word for karaoke?  I don’t think she understands me.”  I explained in more detail and we all had a good laugh. 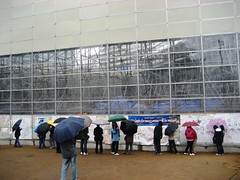 After a while though what struck both of us was the regular use of Korean English.  By this I mean words that are clearly English but which are used in a completely Korean context.  For instance, the two bottles of hair product you find in any hotel in America would be shampoo and conditioner.  Here they are shampoo and rinse.  Even written in Korean, if you sound them out, you get “shampu” and “rinsa”.  The words are English, but the idiom or context is Korean.  In America, food which is considered to have fewer calories or sugar or salt is called “health food”.  Here it is “well-being” food.   In America, copying the answers from another person in class is called cheating.  Here it is called “cunning” (the word is used to mean cheating).

Koreans also have a fascinating habit with English movie titles.  If you sound out the Korean on movie posters, you get “Becoming Jane” “Sweeney Todd” and “American Gangster”.  Oddly, the Korean language has a word for an American - miguk - but they transliterate (sound out) rather than translating the title for American Gangster.  Some movies however get translated.  This makes it fascinating to sound out Korean words - once you get the sound, you have to decide, is that Korean or English?  I get a lot of practice watching movie trailers on the bus. 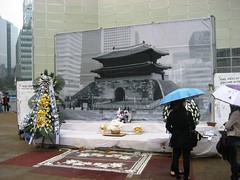 The most interesting aspect of English in Korea however is its potential impact on the culture.  Language gives us a way to express what we think, but also shapes how we think or what we think about.  In Korean, there are words for almost every relationship, including my husband’s younger sister, my husband’s younger sister’s husband, my father’s elder brother, and so on.   This is crucial in a culture that places every individual in a hierarchy, usually by age.  Korean also has at least three types of verb endings to indicate various levels of respect.  Some actions, like to eat, have two separate verbs, one for lower status people and the other for higher status people.

English has few of these distinctions.  We cannot easily distinguish my brother-in-law (my sister’s husband) from my brother-in-law (my husband’s sister’s husband).  We rarely focus on who is elder or younger, beyond our siblings.   For formality or respect, we might add “sir” or “ma’am” to a sentence or say “You are cordially invited to join us for dinner at 6 pm” rather than “Come on over at 6 for dinner”.   This means that as more Koreans learn and use English, there may be cultural changes created by linguistic habits. I am not suggesting that simply speaking English moves a culture from a focus on hierarchy and relationship to democracy and individuality, but it would be a fascinating topic of study.

All Koreans now learn at least four years of English and more and more Koreans are learning 6, 8 and 10 years of English.  Almost 20% study overseas.   English is everywhere, and although often it looks “incorrect” to an American eye, many usages such as “rinsa” or “well-being” are standardized, common, and proper in Korea.  Koreans are adapting English to their own purposes, creating a Korean-English idiom (sometimes referred to, disparagingly, as Konglish).  I am deeply curious English may morph from a foreign or “second” language into an agent of change in Korean society.

[I didn’t have time to take pictures of signs for this blog.  Instead I’ve posted an image of one English language sign at Sungyemun or Namdemun gate, plus pictures of the gate and memorial.  This is the 600 year old landmark that was burned down earlier this year.  See related blog at http://blogs.saintanselmcollege.net/bethsalerno/2008/02/11/cultural-loss/  ).