A visit to the DMZ 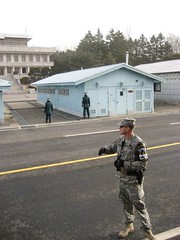 Every once in a while I am reminded that I am serving my Fulbright in one of the only countries in the world in the middle of an ongoing, formally declared war.  Granted, it is currently a very quiet war and it looks pretty likely to stay that way.  However the election of a new, more conservative South Korean President has raised “the North Korea issue” quite a bit recently.

With this background in mind, Tod and I took a USO tour to the Demilitarized Zone.  It lies about an hour north of Seoul and runs 155 miles across the peninsula.  Having already traveled in North Korea on my Diamond Mountain tour, I expected some of the same reserved but engaged interactions between North and South Koreans.  Not here.  This is where the war is still happening, where U.S. and South Korean soldiers died as recently as the 1970s, where shots were fired in this century, and where both sides take their job very, very seriously. 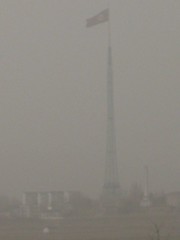 Our tour began with the bus trip from Seoul.  Within half an hour we were driving between two endless lines of barbed wire, which protected the road and a few nearby farms from invasion.  After passing through the Southern Line Limit (the southern border of the DMZ) we reached Panmunjom and Camp Boniface (named after a U.S. soldier killed by an ax-wielding North Korean soldier during a tree-trimming incident that became an international skirmish).  We had a briefing by a U.S. soldier attached to the U.N. force that patrols the DMZ.  U.S. soldiers are now less than 10% of that force.

I am a little fuzzy on when we passed through which security protocols, which probably makes the U.S. military happy; they are understandably worried about information going from their offices, through blogs, to the North Koreans.  But in general, we were taken to a couple of observation posts, from which we could see North Korea.  Unfortunately we were there on a terribly foggy day, but we could see “Propaganda Village”(Gijeong) where pro-North Korean slogans used to be broadcast 24 hours a day at South Korea.  The flag flown there weighs 600 pounds when it is dry and the flag pole has been raised twice, to ensure it is higher than the flag pole on the South Korean side.  South Korea also has a village on the border called Freedom Village (Daeseong), which is under the control of the UN.  Villagers are not obligated to pay taxes in South Korea or do military service; however they are required to abide by strict curfews and other restrictions. 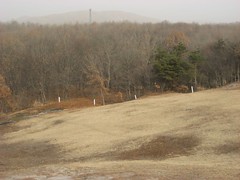 We also visited the Joint Security Area where troops from both North and South Korea are present.  We could look across at the North Korean guards watching us through their binoculars.  The UN force has long imposed a dress code on those visiting the DMZ, so that North Koreans can not use images of Americans in cut-off shorts, torn jeans, or slogan-bedecked t-shirts as propaganda that Americans are poor or degenerate.  These have been relaxed some in recent years.  However the ban on pointing still exists, lest the North Koreans say that Americans are all eagerly asking the guards for permission to emigrate over to North Korea.

The Military Armistice Commission building is used jointly by North and South Korea for talks on unification and other issues related to the armistice that governs the two nations.  When we walked inside the building it was the only point where we could cross the line dividing North and South Korea.  The line is marked by white posts spaced about every 5-10 feet for all 155 miles of the border.  In the MAC area, the line continues as a raised concrete line between the buildings.  Even in the MAC building, the microphones down the center of the table marked the divide. 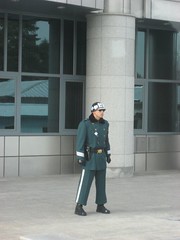 South Korean soldiers chosen for their intelligence, loyalty and size guard the DMZ whenever tourists enter the area.  They have ball bearings in their shoes so a few of them sound like a crowd and they wear sunglasses to intimidate the enemy.  Like the guards at Buckingham Palace, they do not smile, move or acknowledge your presence.  Of course many tourists felt the need to test their resolve, a move almost as stupid as wildly pointing to the North Korean guards.

Four tunnels from North to South Korea have been found, largely due to the help of the North Korean tunnel planning expert who defected in the mid 1970s.  The latest tunnel was found in 1990.  We toured tunnel number 3, which is over 1500 yards long, 6 feet wide and supposedly 6 feet tall, though I regularly hit my head.  It was blasted out of solid rock in order to permit 10,000 armed soldiers to invade South Korea.  We could tour the parts that are in South Korean territory and I can only imagine the national shock when the tunnel was discovered - it was a bit shocking just to walk in it. 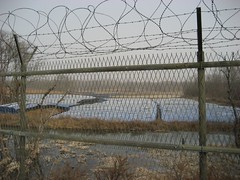 What makes the DMZ tour so fascinating is the sense of unreality.  Grim-faced South Korean guards contrast with the humorous and folksy US soldier who clearly has done this tour many, many times.  We were banned from taking pictures in some places for security reasons, so most tourists then took a million pictures wherever they were allowed.  We watched a film that stressed the DMZ’s role as a nature preserve and expressed high-flown hopes for reunification.  We then looked at exhibits that stressed the brutal nature of North Korean actions against South Korea even after the armistice.   We came up out of the invasion tunnel into a gift shop.  Outside, on the other side of the barbed wire, were ginseng farms.

Few South Koreans have visited any of these areas.  They need special permission to enter the DMZ.  Thus the entire DMZ “tour experience” has been created for foreigners, not for those who participated in the history, or for the people who have to live with its consequences.

It was not really a war zone, and yet in other ways, it was.  The soldiers there really do risk their lives every day, even if the altercations are few and far between.  They would argue the altercations are rare BECAUSE they are there.  The US and Korean flags in the Military Armistice Building have been replaced with plastic ones after North Korean soldiers used the cloth ones to polish their shoes and blow their nose; on both sides, the propaganda war continues. 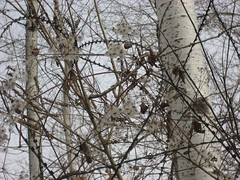 Two friends here were kind enough to give us a piece of DMZ barbed wire, a gift given every year to active duty US military personnel.  So I will have a piece of the DMZ in my office when I return.  Once again I can hope that some day it will be a historical relic, a symbol of an era dead and gone.  But for now, the war continues.