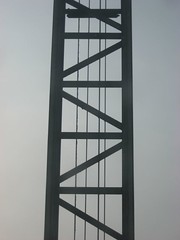 This morning I woke up to find this sight out of my seventh story window - a large metal “ladder” but without anywhere to put feet.  After staring at it a few moments, a flat platform went up past my view.  A few moments later the platform came back down, bearing a kitchen table!  OK, now I’m willing to brave the cold on the porch to see what is going on.  I open the sliding glass doors and screen, lean over the bust high metal railing, and look down.

There below, is a blue truck to which the long metal structure is attached.  Next to it is a moving van.  The men stop the platform at exactly the height of the moving van, move the kitchen table from the platform into the van, and send the platform back up.  Over the course of two hours, it moves an 8 foot tall clothing cabinet, old wooden Chinese chests, boxes and boxes and boxes, and an amazingly large television.  I assume six or seven floors above me men are cleaning out an apartment, loading the platform via the same large sliding glass doors I just opened in my apartment. 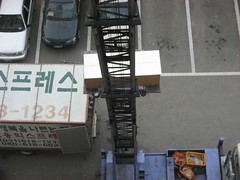 So after spending a couple of months wondering how dozens of people manage to move in and out of my apartment building without ever carrying a single piece of furniture down the stairs or elevator, or always doing it while I’m somewhere else, now I know - they move it out the windows while I am someplace else!  What an amazing labor saving device!

While staring out the window I solve another mystery - why we had such a spectacular lightning storm last night without any thunder or rain.  Turns out workers are arc welding on the roof of the church next door and the light bounces spectacularly off all the glass on my building. 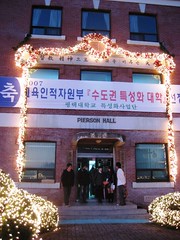 The mysteries of the Christmas season are not so easily explained and perhaps that is one reason why they appeal to millions of people.  Christmas is a “new” holiday in Korea, with Catholicism about 200 years old here and Protestantism about 125.  (For comparison, Buddhism, the other major religion, is at least 2500 years old in Korea).  Christians make up about 40% of the Korean population and that number is growing rapidly.  However, Christmas remains a church-based holiday; only about ½ the subway stations in Seoul had Christmas trees last week and stores began their Christmas sales a full week after Thanksgiving.  Even in the second week of December the Pyeongtaek market had very few signs of Christmas.  Pyeongtaek University is a Christian college, however, so it has been lit up with wreaths since before Thanksgiving. 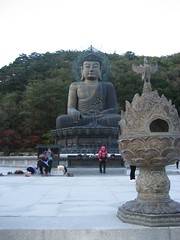 After the holidays I will post a few blog entries on religion in Korea.  In early January I plan to stay overnight at a Buddhist Temple in the southeastern mountains and visit a Catholic monastery with connections to Saint Anselm College.  I have also found an active Quaker meeting in central Seoul and I want to attend First Day meeting.  In the meantime, I will enjoy a long-awaited visit from my husband!  Showing him “my Korea” will likely mean I won’t post any blog entries for a couple of weeks.

Whatever your religion, I wish you joy in the lengthening of the days marked by the winter solstice, the promise of peace and forgiveness brought by Christmas, and the celebration of a fresh new year.   I will spend six months of that new year here in Korea and I look forward to sharing it with you.