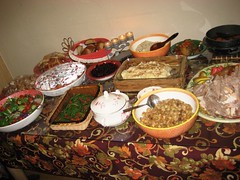 The idea of Thanksgiving is not uniquely American.  Many cultures have a specific day, usually in fall, when they express gratefulness to God for all good things and spend time together with family.  In Korea, this is Chuseok.  But American Thanksgiving does have its unique aspects, particularly its food traditions.  (The Macy’s Thanksgiving Day Parade and college football are pretty special too, and Black Friday must be unique in the world).

I celebrated on Saturday this year with a former American military chaplain and his wife, both of whom teach at Pyeongtaek University.  Seven Korean friends joined us.  Because our hosts shopped at the military base, the Thanksgiving food was wonderfully familiar - a 26 pound (beautifully cooked) turkey, sweet potatoes, mashed potatoes, green beans, stuffing, gravy, cranberry sauce, and green salad.  We also had rice and kimchee.  For dessert there was fruit salad, cheese pie, coffee cake and a decadent white cake with whipped cream and fruit from a local French bakery.  I said to my hostess I was glad she had not made pumpkin pie, because then I would have had to nominate her for sainthood! 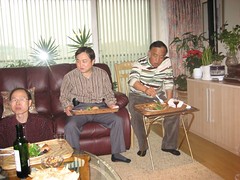 As in the U.S., we ate, and ate, and ate some more, telling jokes and stories, drinking wine and laughing.  I was asked to contribute a Thanksgiving joke, so here’s my effort:

A woman bought a parrot a few days before Thanksgiving.  She had been assured that the parrot knew many words, but so far he had not spoken. However, as each guest came in the door, he greeted them with a series of curse words!  He sounded like a drunken sailor.  The woman was frantic.  She yelled at him, threw things at him.  Finally, desperate, she walked him past the dining room table into the kitchen and put him in the refrigerator where no one could hear him.  After 5 minutes she felt terrible and let him out.  From then on, he was perfectly behaved, saying only the most polite things.  When the last guest had left, he turned to her and asked, quietly, “So what did the turkey do?” 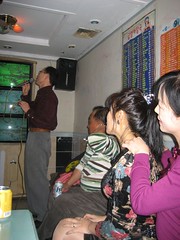 This is Korea after all, so after dinner there was no football.  Instead we went out for norebang.  Norebang is the Korean word for karaoke or “singing room”, a private room with karaoke machine, lights, and a wall of video monitors.  I love to sing, but never know the titles of songs, making it hard to find something I know in a book of 6000 song titles, 5000 in Korean.  But this was my third experience, and my colleagues are very supportive, often singing in English.  Watching a former Korean military general belt out Frank Sinatra’s My Way ranks up there with my best experiences in Korea!  This time I contributed Billy Joel’s Uptown Girl, Desperado, and John Denver’s Take Me Home Country Roads.  I have promised to learn one song completely in Korean before I leave for home!

Given all the richness of my experience here, I gave extra special thanks this Thanksgiving.  While my family and old friends were far away, they were safe and happy.  I had new friends and familiar foods and plenty of laughter.  From the very beginning, one could say Thanksgiving has been an international holiday.  Both the turkey and the Indians were named after countries far away.  The Indians who joined the colonists were representing their own nations.  Colonists were integrating European traditions (like harvest festivals and pie) with American foods (like turkeys and pumpkins).  So perhaps my multinational celebration was more American than I had thought.  I wonder if there was a colonial American tradition of norebang too?