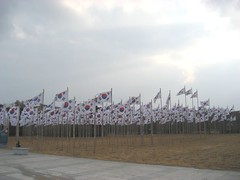 A few weeks ago, the student assistant in the American Studies Department asked if he could take me to a museum.  On a Saturday morning Ji Jae-yong showed up with two friends and a picnic lunch.  We drove about 40 minutes to the town of Cheonan, eating tangerines and sharing stories.   After a great lunch in a blustery wind, we headed into the museum complex, eventually seeing 6 buildings of out 10.

In case you do not know (I did not before I came here), Japan ruled Korea from the mid-1890s until the end of World War II.  This is called the “colonial period” and it was filled with Japanese brutality and Korean independence movements.  The March 1 (1919) uprising is the most famous.  Japan required all Koreans to learn Japanese, to take Japanese names, and to serve the Japanese economy.  Korean resistance was physical as well as cultural, especially the teaching of hanguel (the Korean alphabet) and the sewing of national flags. 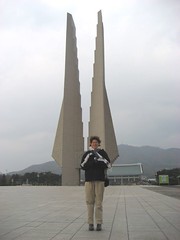 The Independence Hall of Korea was created in the 1980s specifically to counter Japanese histories of this period.  Koreans firmly believe that Japan has still not fully understood or repented its colonial activities.  They point to Japan’s history books, which tend to gloss over any negative aspects of the period, as evidence.

While I could argue with a few signs in the museum which referred to “those wily Japanese imperialists,” one sign was absolutely perfect.  It came after an exhibit depicting Japanese soldiers inflicting horrible torture on members of the Korean Language Association (being a Korean language teacher was a revolutionary and deadly position under colonialism).  The Japanese appeared to be either enjoying their work, or bored by it.  I wondered what the point of this horror was (I would have skipped the exhibit, but the students were eager for me to see it).  Then I found the sign.  It said, more or less, “The actions shown in this exhibit can be forgiven, but should never be forgotten.  We did not create this exhibit to excite hatred or anger toward another nation, but to present the truth as reported in oral testimonies and historical documents.  Only when we understand and accept the truth of the past can we create a united future.”

We all paused and thought.  As an American I was particularly stunned. I fear some day I will read such a sign after an exhibit depicting American atrocities.  Whatever our political beliefs about the reasons such things happen, torture by Americans has and likely is still happening.  We will some day have to account for and perhaps apologize for it.  If we do not, I hope someone creates such a carefully worded exhibit.  We must understand and accept before we can move on. 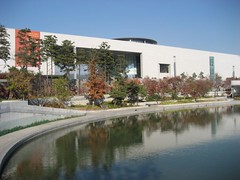 A week later I went to the National Museum of Korea.  It used to be housed in a building built by the Japanese during the colonial period.  Late in the 1990s this was considered inappropriate for Korea’s national museum and it has been moved to a stunningly beautiful new building and park.  I wandered the grounds, deeply impressed with the economic investment Korea could make in protecting its heritage.  It has only been 50 years since colonization and a devastating civil war.  Living people still remember. 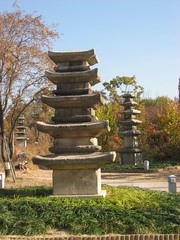 A colleague provided excellent explanations of the moveable type exhibit (Koreans invented moveable type 200 years before Gutenberg). She underscored the connections between patriotism and hanguel, language and resistance.  So you may understand why I was rocked a little off-balance when we next entered an entire exhibit devoted to Japanese art.  Not just Japanese art, but Japanese art in the 1930s, when Japan was using Korea’s economic and human resources to build an Asian empire.  The exhibit had delicately painted screens in gold and bright blue, modernist renderings of Mount Fuji, azure blue pottery, stunningly lacquered boxes, and intricately woven baskets.  The exhibit was mounted with care, thoughtfulness, and a clear love for the pieces.

Here was true forgiveness.  A curator at Korea’s National Museum installed an exhibit of Japanese beauty from a period of Japanese brutality.  There were no signs pointing this out, no hint of politics, just a quiet act of acceptance and generosity.  Here, in a sense, was also Korea’s self-confidence, the ability to showcase Japanese productions amid Korea’s own, knowing Korea’s art would not suffer by comparison.

I am grateful to the students and the English colleague who made sure I got to see the museums.  And I am especially grateful to two museum curators for an unexpected vision of history and forgiveness.