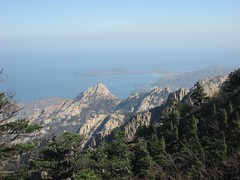 Recently I hiked the Geumgan Mountains, which are just *north* of the Demilitarized Zone separating North and South Korea.  It was one of the most beautiful places I have ever been.  Even though I was limited in where I could visit, I could see why Buddhist monks, Confucian scholars, and Korean poets have written about the mountains for centuries.  I have uploaded 24 pictures to flickr.com and you can see them by clicking on any photo in this blog entry and looking for the North Korea ”set”.

But beautiful as the mountains were, this blog entry is about visiting North Korea more generally.  I crossed what is still technically a war zone and entered what the United States considers a terrorist state.  I did not do it lightly and I learned a huge amount from doing it.  But I have few pictures of the North Korea I will write about, because taking them would have meant at a minimum having my camera confiscated. 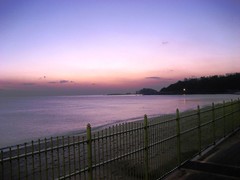 To get to the mountains, I took a bus to the South Korean city of Gosong and stayed overnight.  In the morning, I looked out over a beautiful beach.  Between me and the beach was an 8 foot tall iron fence.  South Korean soldiers patrolled the beach with machine guns to deter North Korean infiltrators.  Apparently South Korea suffered many of these incursions up through the 1960s, including an attack on the South Korean Presidential Residence (called the Blue House).  By 1998 the entire inter-Korean border and much of the northern coastline had been fenced off.

After going through South Korean emigration procedures, we drove through a green, rolling landscape.  There were tree-covered hills, with scattered farms, vineyards, and farmers.  There were also fences, barbed wire, and military observation posts.  Yet even after we passed the last South Korean soldier waving to us there continued to be farms and vineyards - on the very edge of the Demilitarized Zone!  There were also hundreds of white egrets on pristine lakes and other wildlife thriving in the deserted area (except for those which step on landmines, I assume).

When we entered North Korea, the difference was stark.  There were no trees on the hillsides.  The land was much browner.  Farmers in the field plowed with oxen and pulled wooden carts by hand.  The entire road had electric fencing on both sides and the few openings in the fence were staffed with armed soldiers.  The soldiers did not wave.  We were warned not to speak to, speak about, or make eye contact with the soldiers, who were armed and serious. 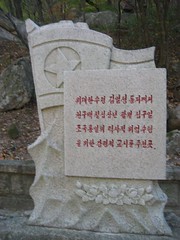 At the immigration processing office, my bag fell off the inspection conveyer belt. A North Korean soldier picked it up.  I automatically said, “Kamsa hamnida” (thank you) to the guard.  He barked something at me, which I realized was “You speak Korean?!”  I quietly muttered “Hangukmal chogum haeyo” (I have a little Korean) and he reached for my identification tag (we wore these around our necks the entire time we were in North Korea, with our nationality, profession, names and photos).  “You are an American?” he asked in Korean.  “Yes, I am an American person.  I arrived in August,” I replied in Korean.  Two other soldiers had walked over now and I thought, “Boy I’m in trouble.”  All three put their hands together in a brief moment of applause and dismissed me.  I hustled away, dumbfounded. 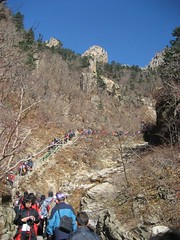 This was the first sign that the Cold War is thawing on the inter-Korean border.  The second and third came at the end of my two hikes.  Because we had a bus accident on the way across the border (I’m fine, just a bruised knee), we arrived at the mountain late.  Since I was one of the last people up the mountain and a slow hiker, twice I found myself followed up by a South Korean guide and then followed down by North Korean officials.  The South Korean was making sure no stragglers missed the bus.  The North Koreans were likely making sure no stragglers intentionally missed the bus.  Both were willing to talk with me, and the North Koreans were very nice.  One gave me a Snickers bar as a reward for being the last one to the summit!  Others asked the standard Korean introduction questions - how old are you?  Are you married?  Do you have children?  Where are you from?  We did not discuss politics, and I did not ask about the bright red pins with pictures of the North Korean leader on their brown official jackets.  We were all cautious and civil and tentative, not really friendly, but not enemies either.  We were all curious, which overcomes many barriers.

The rest of the trip was like being in South Korea.  This is not surprising since all the tourist amenities (from restaurants to souvenir shops to the amazing outdoor hotspring spa) are all run by South Koreans and staffed by ethnic Koreans from China brought in to work for low wages.  In a sense, I was on North Korean land being rented by a South Korean company.  The few North Koreans in fields, on bicycles, or walking along the fence must have thought we had arrived from another planet - rich, well-fed, and thoroughly corrupted by capitalism.  I was sorry we were their only vision of the south and west.  But I was grateful to see them, to have a chance, however small, to put a face to people I usually only read about.  Everyone I saw looked old.

Those people could be the wives or brothers or children of people in South Korea.  The war is not yet over and neither is the grief.  Reunions between North and South Koreans happen more frequently than they used to, but thousands of people do not know what happened to their relatives after they separated, frightened but hopeful, on a night during or after the war. 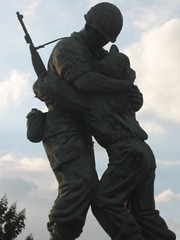 Am I sorry that some of the money I paid went to support the North Korean dictator?  Yes, of course.  But I saw it as an investment.  A few North Koreans met an American who speaks some Korean.  That briefly put Americans in a different light for them.  And one American now understands a little more about North Korea.  If the DMZ is a sign of failure - the failure of either side to win the war, the failure of politicians to find a way to reunite the divided nation - my bus ride across the border was a sign of hope.

The South Korean War Museum has a statue called “Two Brothers”.  It shows a true story in which a South Korean soldier met his younger brother on a Korean War battlefield.  The younger brother was fighting for the North.  The two embraced, battle forgotten.  Perhaps one day all Koreans will be able to embrace their loved ones.  I have stood on the rubble that was the Berlin Wall.  I hope I have a chance some day to stand on the iron fencing that now bounds the DMZ.