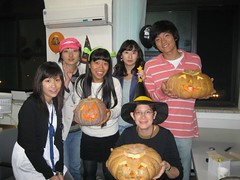 Living abroad makes clear that what we Americans take for granted as ordinary and common might be unusual or strange to other cultures.  Halloween is my latest example.

South Koreans have not traditionally celebrated Halloween.  It has recently become popular at big amusement parks and in a few neighborhoods in the capital Seoul, but generally South Koreans do not know about it.  Therefore planning a Halloween party for my students was a major undertaking in cultural exchange and creative shopping. 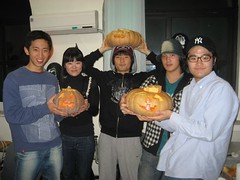 First I looked for pumpkins.  American history textbooks will tell you that pumpkins are a New World vegetable which delighted English colonists who had, until then, been carving radishes and turnips for Halloween (yes, radishes and turnips - I cannot quite imagine!).  The jack-o-lantern pumpkins that are absolutely everywhere in America throughout October simply do not exist in South Korea.  The much rarer, flattened, dusty orange pumpkin (sometimes called a cheese pumpkin in America) is the only kind of pumpkin I could find here. 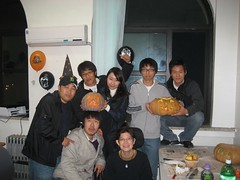 Then there were the decorations.  The huge supercenter in my town had orange and black balloons (which even said Happy Halloween!).  Two days before Halloween I got the last bag.  I also found a few tiny plastic pumpkins.  I bought construction paper and used all the black and orange sheets to make bats, cats, spiders and jack-o-lanterns - and then had to look up why we used those symbols for Halloween so I could explain them to my students!

My students seemed to enjoy the story of Jack.  When the Devil came for Jack, Jack trapped him in a tree and demanded an extra ten years of life in exchange for releasing him.  When Jack died and went to Hell, the Devil got his revenge by refusing Jack entrance. Jack was forced to walk the earth with a lantern in his hand forever.  I felt obligated to tell my students that most Americans have no idea who Jack is or why we carve Jack-o-lanterns.  It is fascinating what we do not know until we have to explain it to others. 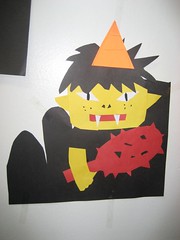 Only two students made an effort at a costume, but all helped to carve their first ever jack-o-lanterns and many made Halloween decorations.  A few students collaborated on a glowing orange skull with a cigarette that looks like a great anti-smoking ad, and I now have a collection of tokaebbies or Korean ghosts on my wall.  A few students shared Korean ghost stories, and all who said “trick or treat” left with candy.  My local stores did not carry a single American candy item except extra dark Snickers minis.  So my little pumpkins were filled with Snickers, red ginseng caramels, and sweet pumpkin chewies.

It was not quite an American Halloween - maybe “fusion Halloween” would be more appropriate.  But when cultural exchange involves “brain surgery” on pumpkins, how can you go wrong?