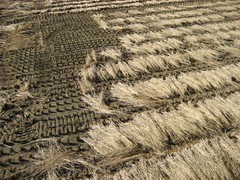 Fall has arrived here, and as in the U.S., I feel like it snuck up on me.  The days were long, hot, sticky and humid, and now there is a sharp crispness in the air and the nights are cold.  The rice fields which were bright green when I arrived are now brown and gold, and the rice stems are heavy with brown grains.  Harvesting machines and hand threshers are both in use here.  Slowly the fields are being transformed into mud flats full of rice straw.

On Soraksan the trees had already begun to turn, with bright red maples shimmering amid dark green pines.  Here in Pyeongtaek the change is just beginning.  The mornings are full of fog over the rice fields, so the colors in the trees slowly seep through the greyness until the sun comes out and turns everything golden. 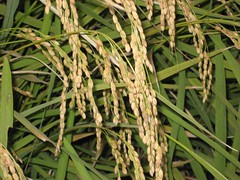 The changing seasons are marked by changing foods.  The nearby town of Anseong is famous for grapes and during early October they were everywhere.  The little ones tasted like Concord grapes, but the bigger ones had a rich, complex taste.  I have also bought persimmons which I don’t think I’d ever seen before - at first I thought they were underripe tomatoes.  They are flattened on the top and bottom, and orange red when ripe.  Their flesh is incredibly soft and unlike anything else I have had - sweet but not too sweet, slightly spiced.  Chestnuts are also everywhere, at first in the size we get in the United States, and now smaller and smaller.  The “fall spring onions” are all harvested and women sit in large groups stripping off the browned outer layers so they can make vats of onion kimchee to last all year.  Just this week the Mandarin oranges ripened on Jeju Island, the southernmost part of Korea, and boxes of them have appeared in markets - local sweet versions of tangerines or Clementines. 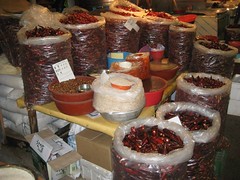 The peppers I saw drying everywhere in August are now in 3 foot high plastic bags on every market corner.  People have finished harvesting sweet potatoes (which are purple on the outside and white in the center here).  Pears which were carefully wrapped on the trees to protect them in August are now in the markets, brown-skinned, bigger and rounder than apples, and crunchy-sweet.  Bright yellow and white-striped, fist-sized melons have appeared and taste like underripe honeydew melons. 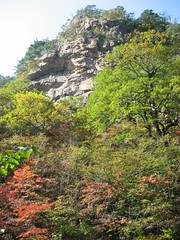 Fall is the season of reaping what we sow.  We gather what we will need for the long length of winter and savor that which we have and might not have later.  I wonder if we glory in fall partly because we know winter is coming.  We are not afraid of it, but we recognize it will be quieter, a little harder, a little darker, and long.  We want every bit of sun and taste and movement we can find before then.

Korea and New England share this glorious fall of color and taste and freedom.  Wherever you are, enjoy fall before it passes.