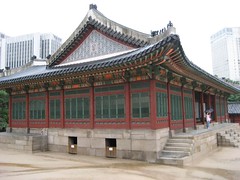 The written history of Korea goes back more than two millennia and their archaeological and mythical record goes back long before that.  But at the moment there is a nation-wide fascination with the Joseon (Chosun) dynasty.  This is understandable.  The Joseon Dynasty lasted from 1392 to 1910 and represents the last period during which Korea was a sovereign, united nation.

So far I have visited four main Joseon dynasty sites.  The second wedding I crashed was at Unhyong Palace (or Unhyonggung) where one of last Joseon kings was born.  He later lived (and I believe died) at Deoksugung, which is pictured above. 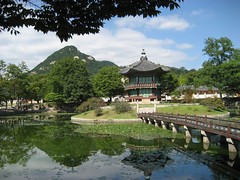 The dynasty’s first palace was Gyeongbokgung, which was destroyed during a Japanese invasion in 1592.  It was reconstructed in 1868 and then dismantled when the Japanese occupied Korea during the first half of the twentieth century.  Since 1990, the Koreans have been restoring Gyeongbokgung building by building, and now have about 25 of the original 330 buildings completely restored with dozens of smaller walls, courtyards, outbuildings and chimneys.  At least another 15 are scheduled to open soon.  With two lakes, two mountains in the background, and thousands of yards of cool shaded walls, the Palace has a truly royal setting. 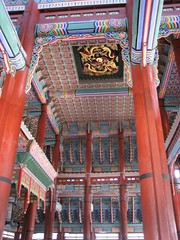 What is amazing about these reconstructions is the level of detail. If you click on any of the pictures in this blog, you will be taken to a larger version of the picture in flickr.com  Look on the right hand side of the flickr page.  You will see that each picture belongs to the “Joseon Dynasty set”.  If you click on those words you will see an additional 25 pictures; run them as a slide show to get a sense of being surrounded by Korean architecture.  Here you can see the symbolic 5 color painting of the ceilings and roofs (respresenting North, South, East, West and Center - and counting blue and green as the same color).  You can also see the careful detailing of the roof tiles, which are covered with imperial animals at Deoksugung (where the king was crowned as emperor) or with royal symbols at other palaces.  Even the chimneys were created to be beautiful - they are tiled in harmony with the buildings around them and often have animals or other decorative motifs carved into them or molded onto them. 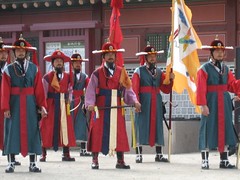 At both Gyeongbokgung and at a Fortress called Hwaseong in a town called Suwon, I have gotten to watch the changing of the guard at the front gate.  Dozens of men dressed as Joseon dynasty military men played instruments, shot arrows, fired guns, carried flags, and performed precision marching steps.  At Suwon, the king came out to greet his townspeople (we the audience) and was practically mobbed with enthusiasm - his royal guard had to fend off a number of time-traveling, camera-wielding ”fans”. 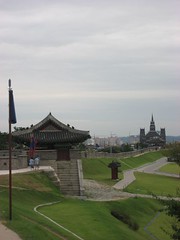 The Hwaseong Fortress in Suwon was built between 1794 and 1796 when the king moved all the government offices and private houses near one mountain to another.  41 buildings were built including a fortress wall that completely surrounded the city.  The fortress was deliberately destroyed by the Japanese, who built a hospital and other service buildings on the grounds in the 1930s.  Then the North Koreans invaded and American bombers destroyed much of what was left.  But the people of Suwon have rebuilt over 30 of the buildings and one can now walk almost 2 hours around the rebuilt fortress walls on well-graded paths with the occasional water fountain and helpful tourist information stand.  Yet many sections have a wild, distant feel to them, where one can imagine spending long shifts watching for the enemy and being hot or cold or just far from home.

I promise not to subject you to too many history lessons, but hey, teaching history is my job!  Thank you (kamsa hamnida or komap sumnida) for your many comments on the blog and e-mails about it.  Knowing there are people reading and enjoying makes it worth it.  Annyeongi kaseyo (good-bye) for now.