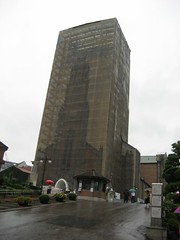 A few weekends ago I went into Seoul to be a tourist; I left Seoul a wedding crasher. Now I’ve done it twice!

As I hope I have conveyed, I try hard not to be an “ugly American.” I don’t take pictures of people without asking, I try to speak at least a little Korean, I try not to wander anywhere I’m not wanted or permitted. When I wandered into Myeong-dong Cathedral (which is under construction), I was curious about its art and history. Instead I walked right into a Catholic Korean wedding, with a father walking his white gown-bedecked daughter up the aisle. I quickly headed for the back row of the cathedral and left soon thereafter. It was absolutely beautiful with a dozen women in hanbok, the brightly colored satiny dresses worn by Korean women on special occasions. But I felt like a voyeur on someone else’s special event. 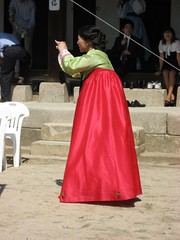 Last week, I was visiting Unhyeongung Palace at 10:30 on a Sunday. There were a few tourists and a whole lot of very well-dressed Koreans. With my English language guidebook I studied beautifully hand-made recreations of nineteenth century clothing, the separate men’s and women’s quarters, the historical exhibits in the museum. As I went to leave, the gate keeper asked why I was missing the chance to see a traditional Korean wedding?

“Don’t you have to be invited to attend?” I asked (in English). “No, this is a public place and you are American, you must attend.” Shepherded firmly to a seat in the back, I became a wedding guest, who tried to take pictures only when relatives were doing the same. 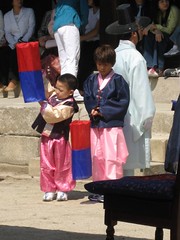 I wish I could explain to you the meaning of the entire event, but the general outlines were very clear. A band came through and announced the start of the wedding (you can see pictures under “recent photos” on the right hand side of the blog page - click on a photo and it will take you to my photostream on flickr.com). Two small boys carried banners and led in the master of ceremonies. The bride and groom entered separately and paid their respects to their ancestors, their new in-laws, and each other. They drank tea and offered chestnuts and fruits to each other, perhaps for longevity and fertility. Two “aunts” helped both bride and groom with protocol and kept their gorgeous clothes from catching on things. The bride and groom got a long lecture by the master of ceremonies which was clearly, even though I understood not a word, the equivalent of that moment in a Christian wedding when the bride and groom are exhorted to treat each other well. And then we all applauded and the wedding was over. 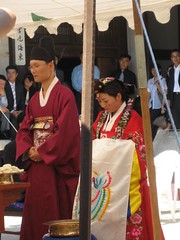 As I walked out, the bride looked over, smiled and waved at me, apparently not at all upset that her wedding had become a tourist attraction. This is the amazing generosity I have encountered at every turn in Korea. People are excited that someone is interested in their culture and they are eager to explain and share. I tried to return that willingness to share a few days ago when an elderly man approached me in a park and asked me, with a deeply serious look, whether “as” in the phrase “to toll as a bell” was a conjunction. I had no idea. We discussed the meaning of “simile” and “metaphor” and I was in way over my head, but he left smiling. So goes the life of this cultural ambassador, wedding crasher and grammar instructor. It is a good life.