Recently I had an amazing meal and I can say with certainty I will never have it again.Let me explain. I took a bus into Seoul intending to have Turkish food (hey, you can only eat one kind of food so long without a break!) but I could not find the restaurant. Instead I passed Cunga Conga Fresh African Café and could not resist. African food in the center of Seoul? The menu was entirely in Korean, except for “Creamed Corn Tortilla”. It didn’t sound African, but it was not Korean either, so I ordered it.

I was served a plate of salad - thinly sliced cabbage, covered with an American overlay of iceberg lettuce, one cherry tomato and a slice of cucumber with French dressing. On a separate plate were slices of pickled cucumber and pickled radish - very Korean. My main meal was four creamed corn tortillas, a mound of bright red East African beef and berebere sauce, a small scoop of rice with peas and carrots, a little pile of jalapeno peppers, a little pile of corn, and a collection of spicy baby shrimp. Lettuce and sliced tomato were served on the side.

As I said I’ll never see anything like it again and every piece of it was tasty. But all food here has been extremely good. Korea itself is global in a way I cannot yet explain clearly, yet it also has deeply rooted food traditions. 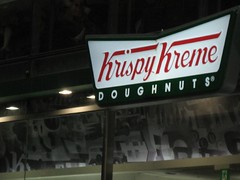 In general there are three kinds of food here: Korean, American, and other (usually Japanese). This was reflected in my students’ answers to my question, “What is your favorite food?” Top three answers: pizza, sushi and Korean food. Increasingly they might add coffee and donuts.

Typical Korean meals always include rice, soup, kimchee (pickled cabbage in any of 100 forms), and 3-4 other dishes. At a “traditional” Korean restaurant (where people go for special occasions like welcoming the new American professor), one is served 4-5 dishes to start and then dishes are brought until the table is completely full. If you finish one, it is removed and another takes its place. Dishes might include grilled mackerel (whole with bones - really difficult when you are newly armed with metal chopsticks), 3-4 kinds of kimchee, 2 kinds of baked tofu, sesame oil on seaweed, Korean style pancake, 2 or 3 kinds of chicken and rice soup, sliced pork which is eaten wrapped in lettuce leaves with soybean sauce, pickled radishes, tiny green leaves with tiny garlic cloves, hot red peppers in sauce - the list goes on and on. 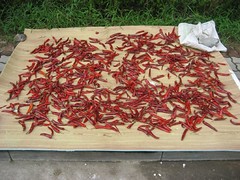 I quickly learned to pace myself, try everything, and then eat seconds of whatever tasted best (except the mackerel - I now avoid all foods with little fish bones until I am in the privacy of my own apartment and can pick out the bones with my fingers). None of the foods are particularly hot to my tastebuds but other people tell me some of the food is fiery. I can believe it given all the hot peppers I’ve seen drying this month (see photo). 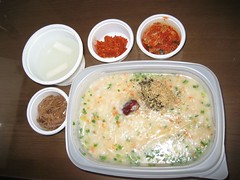 Yet there is great variety. I have discovered a “traditional Korean porridge restaurant” that I like very much. In one variety of “juk” (porridge) rice is pulverized, creamed and mixed with winter squash for a sweet, smooth dish. In another the rice is cooked in chicken broth until it has the texture of grits. Then it is combined with a ginseng root, a jujube fruit, and a half dozen chopped green things (see photo - the things on the side are bossum [boiled meat], daikon radish, a spicy eggplant dish, and kimchee). At another Korean restaurant, our table had a charcoal grill in the center where we grilled bits of duck and then ate them in lettuce leaves with 3 or 4 different sauces and vegetables. We pulled aluminum-foil wrapped sweet potatoes out of the coals as our second course. 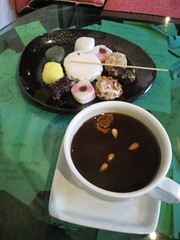 I have not yet tried the pizza so I cannot vouch for its authenticity, but I have had great sushi at two different places. Whelk, mollusk, sea urchin and abalone are not on my usual sushi menu, but they were good, if a bit chewy. For dessert I’ve learned to love these delectable “rice cakes,” (ddoek) filled with or rolled in fruits and nuts. They are soft, chewy, a bit sticky, but not overly sweet - really addictive (see photo).

As long as I can eat well, life is good. I don’t always know what I’m eating, but I just see that as part of the adventure. I’ll try to include more food photos another time, but I am rather conspicuous as it is, so taking public photos of what I’m eating is tough! However, a friend has volunteered to give me Korean cooking lessons soon, so I’ll be sure to ask for a close up picture of Beth and the bulgogi (marinated BBQ beef). Mashikke tuseyo!