Those Were the Days

One of the best things about going to school at Saint Anselm College is the feeling that you really belong. Well, unless it’s N.H. primary debate week.

At other schools, students must show their IDs to a cop or security guard before entering their building. At Saint Anselm, students usually enjoy the feeling of a community; we move around campus freely, without having to whip out our IDs at every building.

However, this week was a little different. As all eyes were on our campus, the security increased. So much so that at some points the campus was closed off, completely. Even to us, the Saint Anselm students.

I figured with my all access pass I wouldn’t have this problem of closed off buildings and parking lots. But today I was stopped many times and had to explain that I was working for the college. When it comes to politics even the small college of Saint Anselm becomes locked down.

To me, the biggest change to the campus came today. On the front lawn of Saint Anselm College a pen was set up to hold the supporters of the presidential candidates. I knew they were coming and as I walked down to set up the camera I thought I was well prepared. END_OF_DOCUMENT_TOKEN_TO_BE_REPLACED

I have been in front of the camera, behind the camera, and at the computer editing all this week. I have to say, even though I respect on-air personal, I have even more respect for the people who make it all look so good.

It has been fun going around campus taking video. However, the real work comes once we go back inside. It takes a long time just to import all the video onto a computer. Then comes the hours of editing to make an entertaining video.

There are many things that go into shooting and editing: lights and sound have to be taken care of; the shot has to be a good one; all the film must be looked at to decide which shots are best to use. Then, audio needs to go in under the film and music may need to be decided on. While scenes need to be edited for time or perhaps mistakes, and usually all this needs to happen the same day the shots were filmed. Who’s the superhero now?

Next time you watch the news, or next time you yourself doing an interview; think about the people who will make your video the best it can be. 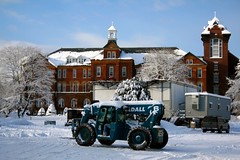