Many of CNN's regular news programs will be broadcast live from Saint Anselm College beginning Sunday, June 3 through Wednesday, June 6. The Democrats debate on Sunday, June 3, followed on Tuesday, June 5 by the Republicans. Stay tuned to CNN for pre-debate and post-debate analysis.

Follow student bloggers who will be posting during the debates, listen to podcast interviews, and check back for lots of photos..

** All programs are live from Saint Anselm College unless otherwise indicated.

WMUR-TV, one of the co-sponsors of the Republican and Democratic debates at Saint Anselm College, has posted some time-lapse photos of the debate set construction on their Web site. You can also view a video news report titled "Set Will Bring Audience Into Debate," which provides some details about the uniqueness of the set design.

[Excerpt From WMUR-TV] Three days before the Democratic candidates for president will square off in New Hampshire, crews continued to work to complete the set for the debate.

"This is going to be the most interesting debate set anyone's ever seen, and we're putting it together for the first time," said David Bohrman, CNN senior vice president.

Right down to the podiums, everything has a modern feel. Squares behind the stage will be filled with fabric cubes with stars and presidential seals lit from the inside.

The twist will come during the second hour, when the focus switches from the panelists to New Hampshire voters. WMUR's Jennifer Vaughn will be the floor reporter, and voters will ask questions while the candidates pull up chairs for a town meeting-style hour.

"There will be 10 cameras," Bohrman said. "They need to be brought in, wired, and cabled, and the audio has to come in."

Once it's all in place, Bohrman said it should wow everyone, including those watching from their living rooms.

Boston's 96.9 FM Talk will be at the New Hampshire Institute of Politics (NHIOP) on Sunday, June 3 and Tuesday, June 5 for the Democratic and Republican Presidential Candidates Debates and Post-Analysis live remote broadcasts.

People are invited to stop by and watch the the debates, 7-9 p.m. on both nights on two big screens and then participate in 96.9's post-debate analysis, immediately following, 9-11 p.m. both nights. If you can't be at the NHIOP, the debates will be carried live on 96.9 FM Talk, courtesy of CNN.

Immediately following the Democratic Debate on Sunday, June 3, from 9-11 p.m., the live broadcast, post-debate analysis, will be hosted by Margery Eagan, Jim Braude, and Jay Severin.

Following the Republican Debate on Tuesday, June 5, from 9-11 p.m., the live broadcast, post-debate analysis, will be hosted by Jay Severin and Michael Graham.

Seating is limited for both events and available on a first-come, first-serve basis. Doors will open at 6 p.m. both nights. 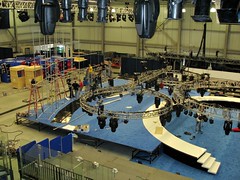 Saint Anselm College's Sullivan Arena, the location of CNN's presidential primary debates, is ripe with activity. I was briefly at the arena this morning and crews are hard at work constructing the stage's backdrop and staging, debate lighting, and seating.

We were lucky to grab CNN's lighting designer, Mike Poley, from Washington, D.C., for an impromptu interview about some of the work that is going into getting the debate facilities into shape for Sunday and Tuesday's Democratic and Republican debates.

During the time leading up to the debates, we'll be providing periodic updates in this blog, so check back regularly.

To hear the interview with CNN's Mike Poley, click on the audio file included with this post.

Saint Anselm College's own Anne Botteri was quoted on CNN.com regarding the college's prominent role in presidential and local politics. An excerpt of the story is included below. For the complete story, visit the CNN Web site.

(CNN) — A small Catholic college in New Hampshire is about to take center stage for presidential candidates hoping to woo voters during next month's presidential debates.

Already, the 2,000 students who attend Saint Anselm College are tripping over the presidential candidates as they make their way to classes.

"It is not even a little unlikely that a student at this college would meet the next president of the United States, not once, but as many as three or four times in an election cycle," said Anne Botteri, executive director of the school's New Hampshire Institute of Politics. "And that's a pretty exciting thing if you think about it."

The college is about 10 minutes from the airport in Manchester, New Hampshire's largest city, making it an attractive destination for candidates hoping to make a name for themselves in the nation's first 2008 presidential primary.

"My philosophy is if they want to come, say yes," Botteri said. "There are some weeks where we are literally doing things every day, or multiple candidates on the same day at different locations."

Botteri said that Saint Anselm has always been involved in the New Hampshire primary, along with other state and local races.

"The college is really, genuinely committed to rolling out the red carpet and having an all hands on deck mentality here for staff and faculty to welcome this," she said.

CNN is sponsoring the debate, along with WMUR-TV and the New Hampshire Union Leader newspaper.

The Democrats will debate on June 3 and Republican hopefuls will square off on June 5.

Jane Maxwell, senior vice president CNN Special Events, said the network and its partners chose Saint Anselm partly because of its strong interest in the political process. "They're very enthusiastic, they have ample facilities. It's in Manchester, which obviously is where we want to have it. The campus is lovely," she said.