A busy fall of academics, recreation, and leisure on the campus of Saint Anselm College has been joined by the buzz of construction this year. END_OF_DOCUMENT_TOKEN_TO_BE_REPLACED

On The Road For Hope

Fifty five Saint Anselm students set off from Lewiston, Maine on Sat., August 23, beginning their week-long trek by foot to Saint Anselm College for the start of the upcoming academic year. END_OF_DOCUMENT_TOKEN_TO_BE_REPLACED 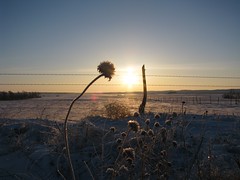 Fri., March 7: The group woke at 6 a.m. to a spectacular sunrise. With a final thank you, and the last wisdom of the elders presented by Tom McCann, the Executive Director of Re-Member, the Saint Anselm group packed their four vans and gathered for one final group picture overlooking the stunning landscape of the Pine Ridge Reservation.

Shortly after 9 a.m., the group was driving down the rutted dirt access road one last time. They departed the Re-Member headquarters with KILI radio, the reservation’s own radio station, providing the musical score in the background. In the following hours, the four-van convoy rolled through grasslands and into the Black Hills as they drove North towards Mount Rushmore, and Rapid City.

Passing through the natural beauty of Buffalo Gap National Grasslands, the Black Hills National Forest and Wind Cave National park, the scenery outside the windows was the perfect backdrop for individuals to reflect on the week worth of experiences and memories they were leaving with. 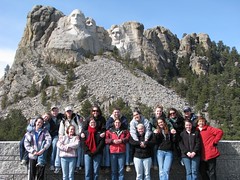 Early in the afternoon the group arrived at Mount Rushmore. Walking under the majestic gateway into the site, mixed emotions were displayed: the understanding that had been fostered in the week-long stay “on the rez” left many participants questioning the placement of the monument in the sacred hills of the native inhabitants. After taking time to reflect on the experience, the vans once again rolled northward.

Sat., March 8: With three flights between South Dakota and Manchester, N.H., the group woke around 4 a.m. local time to reach the airport. As the plane banked East out of Rapid City, one final view of the grasslands, and Black Hills was visible out the right side of the airplane. Subsequent flights took the group through Minneapolis and Detroit, with little time to spare.

Upon boarding the final flight to Manchester, a flight that was delayed in order to allow the Saint Anselm group to make the connection, many fellow passengers engaged SBA participants to learn about the experience. Words were sometimes hard to come by as descriptions were offered to the traveling public.

Shortly after 4 p.m. the flight touched down in Manchester. Back in familiar surroundings, SBA SoDak retrieved their bags, and boarded a bus for the short drive back to campus. Coming together as a group later in the evening with the other SBA groups who had also returned to campus provided a time to share stories, and to model t-shirts that many trips had purchased during their stay.

Sun., March 9: Although Spring Break comes to a conclusion today, the Spring Break Alternative experience continues. E-mails continue to bounce back and forth between group members, with photos being added online by the hour. Processing the experiences of the past week will continue, individually, and as a group. Whether in the classroom, at the dining hall, in the Abbey Church or in a residence, the experience of every group brings a unique perspective back to the hilltop at Saint Anselm College.

For the participants of SBA South Dakota, the past twenty-four hours can seemingly be summed up in two words. Although we’re now hundreds of miles from Pine Ridge, we continue to return to the saying Mitakuye Oyasin: we are all related. 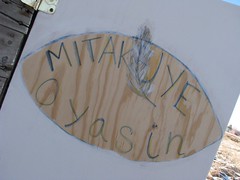 A note from your blogger: The past week has been an amazing experience with a group of amazing people. Only one month ago, I was expecting to be home in Maine for my spring break. Two weeks prior to the departure of SBA trips, I was offered the chance to join this group as an observer for the week. My job description: to document the experience via photography, video and the written word. I couldn’t have asked for a better experience. Not only did the group welcome me with unabashed sincerity, they shared the experience with me. I became part of the group, I laughed, I cringed and I shared in the emotions of processing what we were hearing, seeing, and experiencing.

To those involved in the decision to take a chance on my sharing in this experience: thank you. To the staff at Re-Member who went above and beyond to accommodate my technical needs: thank you. And to the amazing group of participants who comprise SBA SoDak: You are incredible, talented and special people. Thank you for sharing your experience with me, and with those who have been reading and viewing your experience all week.

To learn more about Re-Member, and the Pine Ridge reservation:

Re-Member is the South Dakota host site to SBA trips.

KILI Radio Broadcasting from Porcupine Ridge on the Pine Ridge Indian Reservation, KILI Radio describes itself as “The Voice of Lakota Nation.”

Thursday was tour day for the group.

Loading into the Re-Member bus, the team had high spirits after two days of service, and five days of learning on the Pine Ridge Reservation. The family dinners, group seminars and months of preparation on campus had prepared individuals as best as could be expected…but being on the ground, connecting faces to the stories, and seeing life here first hand brings new context to the experience. 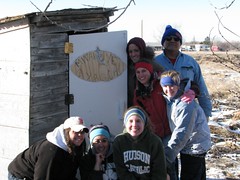 This week, students went outside their comfort zone; they experienced anger, hope, disbelief and pride. They saw things, heard things, and did things for which no one could prepare. Yet, they leave with an overwhelming sense of hope, diminished only by the desire that they could have done more while they were here.

Someone who had never picked up a power tool was sanding square edges on plywood minutes later. Drywall repair became a trade skill. Building, and installing an outhouse door became possible. The group learned about themselves, their peers, their understanding of American history, and their ability to make a difference. They will always remember.

Driving through Pine Ridge on Thursday and looking down side streets with windowless homes, junked cars, and trash-strewn sidewalks, it was easy to forget we were in the middle of the United States. In fact, this experience was set in the middle of Pine Ridge, the service center of the reservation, where the only hospital, the only supermarket, and many of the only public services are available for an area roughly the size of Connecticut.

We will remember the staff here: Tom, Phil, Jerry, Jerome, Theresa, Abby and Vicki - all of whom went out of their way to make our time here memorable and comfortable. Whether it was waiting up until after 1 a.m. to welcome the group upon it’s arrival, to boiling another pot of water for hot chocolate, or offering personal reflections and stories during times of emotional unrest…we will never forget their antics, their companionship and the empowerment they offered. 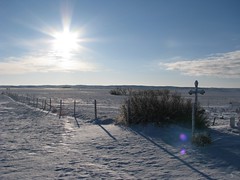 On Friday, the group will depart the Pine Ridge Reservation en route to Mount Rushmore, before returning to Rapid City in advance of their return to Saint Anselm College on Saturday.

Spring Break Alternative participants woke up this morning with a roof over their head, a mattress under their body heat to warm them, and a full breakfast waiting to be consumed. For many on Pine Ridge Reservation, this was not the case.

Morning activities were curtailed due to weather conditions, as the snowstorm of yesterday left roads too dangerous for travel this morning. Overnight, a biting wind whipped snow horizontally across the open land, as the temperature plummeted into the teens. 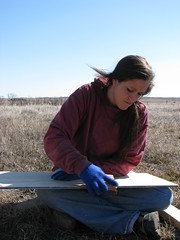 Bunk bed assembly continued through the morning, along with a special project: the building of a new door for the outhouse that had been relocated the day before at a residence in the community of Porcupine. Several students took it upon themselves after the day’s work to take meticulous measurements of the opening - and approached the Re-Member staff at the conclusion of the day to inquire on the possibility of building the door, and returning to the site to install it.

Under a crisp blue sky, and a blanket of fresh white snow, the team of Saint Anselm students constructed the door carefully. The workshop was abuzz with the whirr of power sanders and circular saws as others continued the task of assembling the components for beds.

Following lunch, the groups split up to best utilize the afternoon. One van returned to Porcupine to install the door, and finish work inside the house. Others remained at Re-Member, helping staff with an inventory of building supplies and other odd-jobs around the workshop. 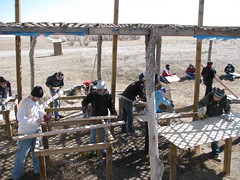 Your blogger followed the crew back to the Porcupine house, and watched as they carefully installed the door. Outside for two-plus hours in the cold, the door was carefully hung, and subsequently covered in a coat of fresh white paint.In the center of the door was inscribed a Lakota saying: Mitakuye Oyasin. Translated in English, this phrase means “we are all related.”

As darkness settled over the hills, and as the group transitioned into their evening with board games and the opportunity to work on native crafts, a man who introduced himself as Kevin rolled into Re-Member in his wheelchair.

Kevin came to Re-Member to offer his artwork and crafts for sale. As he laid charcoal paintings out onto the tables, he informed the group that he was selling his works for as close to forty dollars as anyone could offer. A few students sat down to talk with him, and learned that he was down and out. His situation was bleak, and it was learned that he had hitchhiked some ten miles in his wheelchair on snow-covered roads to offer his work for sale. Several participants purchased his works, everyone marveled at them.

As Kevin prepared to leave, he was offered a van ride back to his home in the community of North Ridge. Accepting the offer, he asked on the ride home to stop at the only grocery store on the reservation - Lakota Nation in the village proper of Pine Ridge.

The following recounts the experience of bringing Kevin home, as told by the group that accompanied him:

Driving into his community, stray dogs ran loose in the streets. Houses were sprayed with graffiti, many houses appeared dark from the outside. A number of residences were boarded up, abandoned and partially collapsed or in extreme disrepair.

With grocery bags in hand, the front door of Kevin’s house was opened. Inside light bulbs flickered with an unsteady flow of electricity. A small heater sat in the middle of the room, responsible for heating the whole first floor of the house. Clothing, dirty dishes and trash littered the countertops, furniture and floors. Seven children were inside the house with their mother.

As the grocery bags were carried in, the kids tore at the plastic to get into the food. With grace, Kevin introduced his family, his wife, and his newborn child.

Kevin came ten-plus miles in the snow and cold to Re-Member with no promise that anyone would purchase his artwork. He engaged the group in conversation for upwards of an hour, and was prepared to hitchhike back to Pine Ridge to buy what he could carry to feed his family.

Last night, Kevin and his family had food in their home — in part — because a group of students from Saint Anselm College came to South Dakota for their spring break, and bought his artwork. The unimaginable was verified yesterday.

In Kevin’s home, and in a grocery store that offers meat scraps for sale, and a sparse selection of fruit and vegetables the stark reality of Pine Ridge Reservation became grossly apparent.