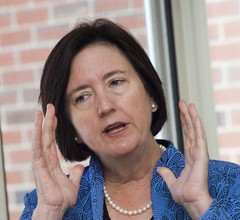 Watch Saint Anselm College’s classics department showcase its expertise on the History Channel this month in Last Stand of the 300, a documentary about the battle of Thermopylae.

Classics Professor David George helped write the script for the two-hour program and served as a “talking head” along with colleagues Linda Rulman, lecturer, and Matthew Gonzales, assistant professor. The release of the documentary coincides with the opening this weekend of the Warner Brothers film 300, a movie based on the ferocious, legendary battle.

The battle of Thermopylae took place in a narrow pass along the Aegean Sea in 480 B.C. Three hundred Spartans, whom the documentary describes as the Delta Force of their day, sacrificed their lives to defend the Greek City States from a Persian Empire force of more than one million men. Saint Anselm’s professors help describe the armor, the military strategies, the societies, and the warriors involved in this epic battle.

“After Custer, Thermopylae is the most famous last stand in history,” the History Channel states in its promotion for the program. “When it is over, every Spartan in the pass will have sacrificed his life for freedom.”

Last Stand of the 300 Links (from Limulus Productions):

Saint Anselm College’s debate team is making the rounds of tournaments and bringing home trophies. Their topic for the year is federal policies regarding energy from renewable sources.

In the Northeast Regional Championships, these three student debaters reached the semifinals. Pirrello and Thorspecken closed out the second round, again bringing home first and second places.

“To close out two final rounds in three weeks is a really special accomplishment for the students,” says debate coach Dave Trumble.

Tournaments are coming up at Central Michigan University, and the team is practicing for the final tournament of the year, the National Forensic Association National Tournament at Berry College in Georgia in April.

“This nation’s prisons are full of people who have looked for salvation and redemption and have found God. Well, thanks to a recently ended academic program at the Women’s Prison in Goffstown, one inmate has found Plato. And she says her discovery has changed her life.”

That introduction begins a Dec. 28 New Hampshire Public Radio story about assistant professor Edward McGushin’s unusual philosophy class. The program was held last semester in the Goffstown Women’s Prison, and was funded by the New Hampshire Humanities Council and Saint Anselm’s Consortium on Justice and Society.