What is this? From this page you can use the Social Web links to save Gov. Mitt Romney Hosts Town Hall Meeting at Saint Anselm to a social bookmarking site, or the E-mail form to send a link via e-mail. 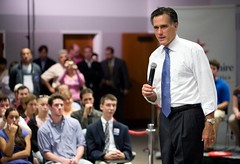 Listen to a podcast of this event by clicking on the audio file at the end of this post. 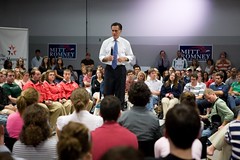 Students took center stage all morning as New Hampshire Institute of Politics Student Ambassadors were on hand to greet Gov. Romney as he arrived in a motorcade shortly before 10 a.m. Once inside, Romney was introduced to the crowd by Greg Wallace '10. During the question and answer period, Gov. Romney took several questions from students of varying majors who attended the forum. Several staff members on the Romney campaign who attended the event were also familiar faces to the Saint Anselm campus, as a number of current staff members are also college alumni. 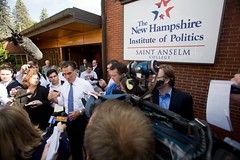 Following another question and answer session with the assembled media outside the front entrance to the NHIOP, Romney caught a number of students off guard as he passed through the cafe as he headed for the motorcade to his next event. Taking the moment in stride, two lunching students captured the attention of the governor, obtaining a quick handshake before the candidate and campaign staff departed.