What is this? From this page you can use the Social Web links to save NBC News Political Director Chuck Todd Previews 2008 Election to a social bookmarking site, or the E-mail form to send a link via e-mail. 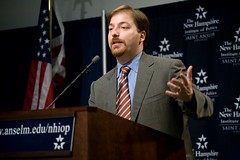 Todd became the political director for NBC News in March 2007. In addition to managing political coverage for the NBC networks, he also contributes on-air analysis to NBC Nightly News with Brian Williams, Meet the Press with Tim Russert, and MSNBC's Hardball with Chris Matthews.