What is this? From this page you can use the Social Web links to save "Running" for CNN - Day 2 to a social bookmarking site, or the E-mail form to send a link via e-mail. 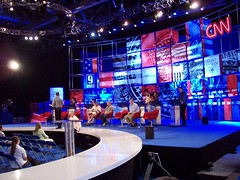 Once again, a number of Saint Anselm College students donned their "CNN - ALL ACCESS" credentials today and headed out onto campus to assist the network with their debate preparations. Several students were assigned to the debate hall while others helped guide campaign staffers through the maze of campus buildings that are being utilized for the debates. More students were utilized later in the evening for a rehearsal of the Democratic Debate to be held Sunday night. 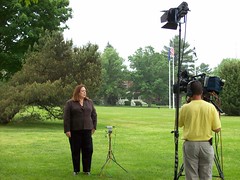 My job today was to help staff the Quad, where two CNN satellite trucks were parked to send out stories to both CNN as we see it here in the country, and the international feed seen around the world. With Alumni Hall as a backdrop, two of CNN's reporters broadcast live to the world as I looked on. Before each live shot, the crew would ask that I step in front of the camera, to allow for the adjusting of lighting and to frame the shot appropriately. 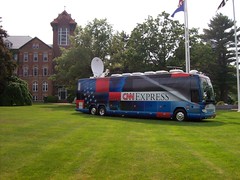 Later in the day, the "CNN ELECTION EXPRESS" arrived on the Quad. This brand new bus will be utilized by the network in the remainder of this election cycle to serve as a mobile newsroom, visiting political hot spots around the country. In what seems like a natural fit, the bus began its trek around the country here at Saint Anselm College. It was a privilege to be one of the first people onto the bus, along with a number of CNN executives who are here on site for the debates to have a first look at what will be seen by millions in the upcoming campaign coverage.