A Land of Hope 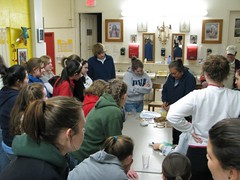 Morning arrived with traditional Lakota music serving as the backdrop to the day. Re-Member staff make a point to remind participants not to set their own alarm clocks, as the soothing music is as much a signal to wake up as it is a mood setter for the day.

Outside, the temperature had plummeted overnight with the whipping winds gusting over the open terrain. The full day was bleak and overcast, with no direct sunlight. Beginning the morning with a group breakfast, and a session led by the executive director, Tom, Saint Anselm participants were welcomed and given a full briefing on the day-to-day operations, and the unique challenges that come with operating Re-Member on the Pine Ridge Reservation. 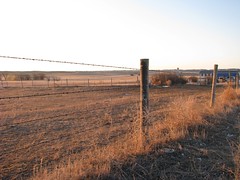 Following breakfast, the Saint Anselm group joined together with a smaller group from the University of Virginia who are also on site this week. The first order of the day was a reading of “the wisdom of the elders,” followed by the introduction to the story of Wounded Knee. Participants then loaded into three vans for the short ride from the Re-Member headquarters to the Massacre of Wounded Knee site. Upon walking to the hilltop where the mass-grave and memorial marker are located, Tom completed his story, allowing several minutes thereafter for participants to walk quietly about the site.

Returning to Re-Member, an open discussion ensued. Participants questioned why there are two different versions of history - noting that in the experience of many, the story Tom told from the Lakota perspective is vastly different from that which they previously understood. Conversation next turned to the challenges, and potential that exists on the reservation. The ensuing discussion focused on land issues, federal government oversight, and the engrained social habits that threaten so many Lakota people: abject poverty, alcoholism, and drug abuse. Participants were told that in one recent study by a local chamber of commerce that most money earned on the reservation is spent within 48 hours of it’s receipt.

In recent history, the county that comprises the vast majority of the Pine Ridge Reservation was determined to be the poorest county in the United States. In the most recent census, Pine Ridge “fell” to third, as two other reservations essentially became poorer. Average annual income here was determined to be approximately $4,000 with an unemployment rate between 80 and 90 percent. On a reservation that is comparable in size to the state of Connecticut, there is only one supermarket. 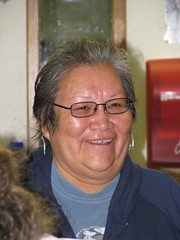 Following dinner, participants were treated to what many described as the highlight of their day: a visit from Minerva Blacksmith, a Lakota resident who shared her life story, and took questions from the group.The discussion ranged from hilarious to solemn. When asked what the greatest challenge to the reservation is today, Minerva paused briefly, before discussing the growing division in Lakota culture. She noted that many Lakota are “losing touch with their spirituality and tradition,” noting that to sustain a strong community, “the Lakota need to live it, care for their spirit, and teach the children of the reservation to embrace their heritage.

In response to what brings the most hope to the reservation, Minerva responded it would be the possibility to educate the youth. Half of the population is recorded as being under the age of eighteen, but on any given day, absenteeism at reservation schools can be over 50 percent. Regardless, Minerva expressed great hope in both traditional schooling, and the immeasurable benefits of mentoring.

As the day concluded, participants took time for themselves: reading, playing group games and exchanging laughter. The sun fell over the horizon and the wind calmed. With a clearing sky outside, stars speckled the sky. Inside, the group took time to reflect on their experience thus far… and to anticipate what is to come in the days ahead.

The following events were recorded in real time, during the first day of Spring Break Alternative 2008.

12:30 p.m. E.S.T. - The “SoDak” SBA group met at the Romero Center in Lower Cushing Center for a last minute overview of what to expect in the day ahead. As other groups departed, some delayed by weather, busy SoDak’ers took time to send each group off into the snow.

3:50 p.m. E.S.T. - Boston Logan Airport - During check-in at the Northwest Airlines ticket counter, SoDak encountered a contingent of - who would have guessed - Saint Anselm College faculty on their way to Rome. After causing minor chaos to the ticket counter staff with our large group, we were off to the security checkpoint, where we said good bye to Sue.

4:40 p.m. E.S.T. - Boston Logan Airport - The group is now awaiting the boarding call for our flight to Minneapolis. Sitting in the concourse, we just watched two fellow Saint Anselm College students walk by on their way to their spring break destination: the Caribbean.

6:01 p.m. E.S.T. - In the skies over Boston, Mass. - As the sun sets over the city of Boston, our flight is off the ground and bound for Minneapolis, Minn. Our group is spread throughout the plane, but from my seat I can see several participants reading, listening to music and napping. Our fearless group leaders, Kristin and Sarah, report they have been awake nearly 48 hours at this point, with only short naps to keep them going.

8:06 p.m. C.S.T. - In the skies over Minneapolis/St. Paul, Minn. - As we prepared for landing, we crossed over the Mississippi River and expansive suburbs of the Twin Cities on our final approach to the airport. A row behind me, English Professor Denise Askin, who is accompanying this trip as a participant, was paging through a copy of Black Elk Speaks, an account described as “a book of visions of an American Indian Black Elk” as told by author John Neihardt. At Saint Anselm, Askin offers a freshman course in English called “Native American voices” and was invited to join with the group for the trip.

8:45 p.m. C.S.T. - From Terminal F of MSP - Students have made a beeline for a quick bite to eat during our layover in Minneapolis. Showing their culture, a majority of the students returned with sushi, salads, and sandwiches rather than something fried. Boarding has just been announced for the final leg of our flight to Rapid City, South Dakota.

9:25 p.m. C.S.T. - In the skies over Minneapolis - We are “wheels up” from Minneapolis, en-route to Rapid City. As the plane banks away from Minneapolis, the partially filled cabin is full of chatter from Saint Anselm students conversing amongst themselves, and making friends with other riders. During the longer flight from Boston, a number of passengers clearly became quite familiar with our trip, as more than once students were wished good luck and encouraged to have fun upon deplaning.

9:38 p.m. C.S.T. - In the skies over southwestern Minnesota - The flight deck just informed the passengers of Northwest Flight 1203 that the current temperature in Rapid City is 64 degrees at 8:39 p.m. local time. For a group that had its trip departure delayed by a snowstorm earlier in the day, this is nothing short of amazing! Your blogger is prepared to pull out shorts for the drive to Pine Ridge should the temperature be above 60 when we arrive…

10:20 p.m. M.S.T. - In the parking lot of the Rapid City, South Dakota Airport - After a turbulent arrival, we picked up our luggage (everyone’s made it!) and the group made final arrangements for the pending two-plus hour drive to Pine Ridge. As we stepped outside to pack our four minivans parked curbside, we were greeted with tumbleweed blowing across the walkway. Clearing the side of the building, SBA SoDak received its welcome: the winds of the plains. Strong enough to not only whip everyone about, the gusts actually took several people off their feet, sending them tumbling into the adjoining grass.

10:42 p.m. M.S.T. - On the road in Farmingdale, S.D. - After a long day of travel, unpredictable and out-of-control weather, and excitement, four vans are rolling south out of Rapid City en-route to Pine Ridge.

1:31 a.m. M.S.T. - Following a drive that took the group through the badlands - twice - the minivan convoy arrived at Pine Ridge. The highly regarded “Tom,” the program director here at Re-Member, was at the front door to greet the leery-eyed travelers as they arrived. Following brief opening remarks, and a quick orientation of what to expect tomorrow (today now…) participants were sent on their way to unpack, settle into bunks and get a few hours of rest.

Greetings, and welcome to the Spring Break Alternative (SBA) Team “SoDak” Blog. In the coming week, I will be “embedded” with a group of Saint Anselm College students who are volunteering with “Re-Member,” a group based in Pine Ridge, South Dakota on the Pine Ridge Reservation.

Each year, Saint Anselm College, through the office of Campus Ministry has been sending students to sites across the United States, and abroad to spend their spring break in an alternative fashion from the traditional warm and sunny beaches. Students work with host organizations at each site, doing everything from building bunk beds to serving in soup kitchens.This year, groups are traveling to locations ranging from Costa Rica, to Maine, Louisiana and South Dakota. In all, nearly 200 Saint Anselm students will be participating in the program this year. So sit back, and enjoy the experience of being an extended part of SBA: SoDak!

An introduction to your reporter: A junior politics major from Augusta, Maine, Cory True is a new media reporter for the Saint Anselm College Office of College Communications and Marketing. Cory is carrying an extensive array of technology with him, ensuring the full experience of the students will be captured. In the days ahead, look for video, audio, and many photos to accompany the text found on the Saint Anselm College Blog. A special thanks goes out to the staff of Re-Member, and the participants of SBA South Dakota for agreeing to participate in this truly unique opportunity.