They Came All This Way

Today’s experience exceeds the means of written and visual communication.

Participants of the spring break Trip to South Dakota were told before they left that this trip would change their lives. They were told they would see things and do things that were beyond their comprehension…Today, that happened.

No longer was the Lakota life observed from behind the glass of a van passing on the highway. No longer were the statistics and second-hand stories the basis of understanding the challenges of living as Lakota.

Shortly after 9 a.m., four Re-Member vans pulled up to a house in the community of Porcupine. From the outside of this residence, many in the vans noted that this house appeared, at first glance, to be in better condition than many other homes observed along the route we have previously traveled. 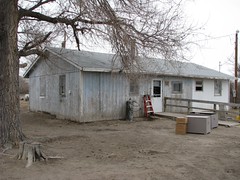 A dog house sat in the yard, with three small pups residing inside. In the field to the right, an abandoned car with a collapsing roof and broken windows interrupted the natural landscape. Behind the house, precariously perched on an embankment, sat a small wooden shed, that was soon learned to be the outhouse of the residence.

Inside the home, single-pane windows were covered in plastic from the outside, with sheets, towels, and blankets providing an extra buffer from within. One electrical outlet behind the living room couch featured exposed wiring that reportedly smoked from time to time. On the kitchen counter, and in a back hallway, dozens of water jugs sat on the floor.

The house had no functional plumbing.

Work commenced: drop cloths were laid out on the floor, spackle was apportioned, and the volunteers were given a crash course in drywall repair.

Outside, others collected shovels, and began to dig a new pit upon which the outhouse would be relocated. A light rain that had been falling transitioned to snow.

For the next three hours, work continued at an incredible pace. Re-Member staff tended to electrical concerns while volunteers spackled and painted in unison. Large holes were tended to with great care, with a team of students tackling the job of cutting new drywall to fill one particuarly large gap. 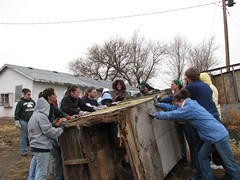 Outside, the pit became deeper than SBA’ers could handle from the surface. In the developing mud, they jumped down into the hole to dig further. When the time came to relocate the outhouse from its original position to the new hole, the entire Saint Anselm crew came outside and into the snow to lend a hand.

Overcoming an unbearable stench and the visual of a pit full of refuse, the crew orchestrated the movement of the structure some fifty feet. As rotting lumber fell away from the footings, and the snow whipped nearly horizontally, the outhouse was lowered onto the new pit.

The young daughter of the homeowner appeared outside as the crew began to troubleshoot how to rebuild the floor. With a smile on her face, and a gas station slurpie cup in her hand, she picked up a shovel and helped place dirt around the perimeter of the structure.

As departure time neared, and cleanup began inside the house, a final touch was added to the outside facility. A scrap of carpet was placed onto the muddied floor at the base of the wooden seat.

It was this touch of home that inspired the homeowner to speak with the Re-Member staff who were on site, her words: who are these people, and where are they from - how can I repay them for coming here? 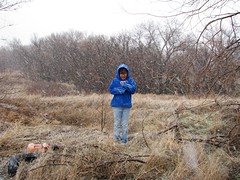 The answer provided by Theresa High Horse, one of the Re-Member staff: they are college students, they are from all over, and they have come all this way to help you.

The group would later learn that the homeowner is the daughter of Theresa.

On the schedule for Wednesday: Continued service work in the communities of Porcupine and Kyle.