The Connections Between Hip-Hop and Social Justice

Dr. Muhammad gave a lecture entitled “No Borders: Social Justice, Hip Hop, and Pop” in which she described the strong and enduring connections between hip hop and youth culture. She also discussed how the powerful relationship between them can translate into social activism among today’s youth. She credits her efforts to those who came before her, especially Dr. Martin Luther King Jr., who himself often used contemporary cultural references in order to create change.

Calling herself a “cultural worker” and a “creative hybrid,” Muhammad has worked in the Mount Vernon, New York area for years. The town, located just north of the Bronx, has close ties to the hip-hop community; it saw the beginnings of hip-hop and pop culture legends such as Diddy, Mary J. Blige, and Denzel Washington. Therefore, it was the perfect location to “employ the arts as a catalyst for economic development in the area.” And so, the Mount Vernon Hip-Hop Arts Center was born.

Muhammad described her work at the center and her desire to use hip-hop as a medium to encourage more participation in the arts along with civic engagement. She stated that one of her goals is to show young people today that “the world is bigger than they can even imagine.”

Those Were the Days

One of the best things about going to school at Saint Anselm College is the feeling that you really belong. Well, unless it’s N.H. primary debate week.

At other schools, students must show their IDs to a cop or security guard before entering their building. At Saint Anselm, students usually enjoy the feeling of a community; we move around campus freely, without having to whip out our IDs at every building.

However, this week was a little different. As all eyes were on our campus, the security increased. So much so that at some points the campus was closed off, completely. Even to us, the Saint Anselm students.

I figured with my all access pass I wouldn’t have this problem of closed off buildings and parking lots. But today I was stopped many times and had to explain that I was working for the college. When it comes to politics even the small college of Saint Anselm becomes locked down.

Tonight, I had the opportunity to meet Viggo Mortensen, an avid supporter for Dennis Kucinich and the famous Aragorn from The Lord of the Rings films. END_OF_DOCUMENT_TOKEN_TO_BE_REPLACED

Life in “The White Hot Center of the Universe”

When things started to pick up before the debates on Saturday afternoon, I knew it was going to be an exciting evening. The energy on campus was high and everyone in a few mile radius could feel it. As one reporter told me yesterday, “We are the white-hot center of the universe tonight—and you’re in the middle of it.”

That sentiment certainly echoed true throughout the night. With days of preparation behind me, the moment was finally here. Streams of journalists filed past me to pick up their credentials: everyone from prominent The New York Times reporters, to the managing editor of People magazine, to Japanese public television correspondents. All of them were excited to see not only what the debates held in store, but this whole election. And as someone with a large appreciation for popular culture—it was beyond memorable that I met people who I watch on TV every morning, and people who write for the magazines that I read religiously every week.

Things reached a fever pitch during the time in the spin room. Journalists rushed from the Media Filing Center in Carr Center to the spin room in Stoutenburgh Gymnasium. All eyes were eager with anticipation and all cameras were pointed and ready to click at who would walk through the door ready to “spin” their candidate. You could tell the instant that someone walked in because the cameras and journalists would form an imposing swarm around the person and the cameras would start flashing. Republican candidate Ron Paul’s arrival into the spin room caused an uproar, as did Elizabeth Edwards and Mass. Governor Deval Patrick.

Even though the energy surrounding this event is starting to die down, the fervor for this historic election is still going on. I was asked yesterday by a reporter why I was interested in what was going on if I wasn’t a politics major. I responded that this is an important election for everyone because of the big issues on the table. But more than that, this election is truly history in the making. And as a history major, being even a small piece of that is all that I could ask for. And all of the other people I met and things I experienced was just icing on an already very sweet cake. 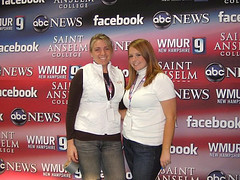 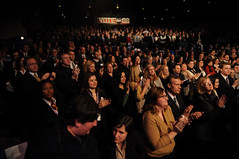