Throughout my two and a half years here at Saint Anselm College, I have spent many sleepless nights here in Cushing, finishing up papers and making lasting memories with friends as we have pushed ourselves to finish that last essay, study for that final exam. Never in my wildest dreams did I think that I would be in that same building filled with movie stars, the most televised news anchors in the country, and possibly the future president of the United States.

Last night, I stood on the main floor of Cushing with some fellow students and watched as “Hannity and Colmes” was recorded and televised live right in front of us. After meeting both hosts, I simply walked up to Steve Forbes; yes, of Forbes magazine(!). 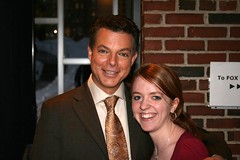 Standing in front of the make-up studio, Shepard Smith walked up to me and we simply started talking as if we were the oldest and dearest friends. Not much later, I met Viggo Mortensen, Dennis Kucinich, Mike Huckabee, Rudy Giuliani, and Kirsten Powers.

Needless to say, I walked back into our college headquarters speechless. Throughout my meetings with these people, I had been able to maintain my cool. In reflecting on all of this, though, I found I was completely star-struck.