Exactly one month before voters head to the polls for the New Hampshire Primary, the college had its first taste of the pending Primary excitement roll onto campus about an hour before the first final exams kicked off to end the semester.At 8 a.m. Saturday morning, Fox News arrived with the shell of their “Fox Box” — the mobile television studio that will be utilized to broadcast various Fox News programs from the Quad of Saint A’s in the days leading up to New Hampshire’s first-in-the-nation primary.

As students moved across campus heading to their first exams in the crisp early morning air, frequent gazes were cast over the quad as physical plant staff utilized a full sized bucket loader to clear accumulated snow in order to may way for the set. Design plans were laid out, markers were set, and construction quickly commenced. 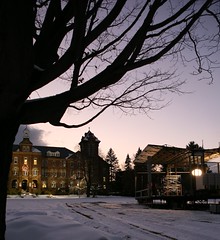 Throughout the day, trailer trucks came and went from the center of campus. At mid-day, a trailer-sized “entertainment services” industrial generator was delivered and fired up to provide power to the construction team. Within hours, the folded up frame had morphed into a giant platform with a suspended roof, establishing the basic footprint of what will become the studio.

A sure sign of just how accustomed the Saint Anselm community has become to seeing the college in the media spotlight, students went about their day normally, utilizing the Cushing Student Center for study groups, even as Fox News employees captured digital photos of the same space that will soon be their workspace and New Hampshire newsroom.

Although we’re all anxious to wrap up exams and head home for the holidays, many students have already committed to curtailing their breaks to return to campus to be part of the Primary experience. The daily ebb and flow of 2,000 students will soon be replaced with candidates, the media, and hundreds of raucous supporters. Dana Center, home to the college’s humanities program will be transformed into a debate set and the Goulet Science Center will become the backdrop to a national news network. 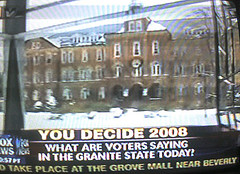 And of course, we’ll be here to cover it all. We have a number of exciting plans in the works, so stay tuned!