In My Humble Opinion…

Since the entire media has already covered many aspects of the Democratic debate, here are some quick observations:

- It was disappointing to see that the CNN Express Bus replaced the view of Alumni Hall. Sunday morning viewers had a clear shot of the building, but by the afternoon that view was blocked by the giant bus.

- I feel bad for the CNN sound crew. Fahey’s mic did not work (twice) and the “back chatter” of the candidates could be heard throughout the debate. Columnists from The Politico, The Hotline, and others wrote on the topic.

- It’s disappointing to see little focus on the Biden, Dodd and Richardson. The Big Three were able to debate between each other, while the second-tier candidates were constrained. Even, Ray Buckley is complaining that NBC ’s fall debate better not follow the CNN route.

- Finally, a student from the Saint Anselm College student body should have been given the opportunity to ask a question.

Some 51 Saint Anselm College students have been working closely with CNN on debate preparations since late last week. These students and their 10-hour plus work days have played a critical role in making the debates a reality. Students have worked with CNN’s news anchors, correspondents, set designers, marketing and public relation staff, and others running errands, standing in for set checks (lighting, sound, video), moving sets, and many other important roles.

In the meantime, they’ve got to know many of CNN’s on-air talent and executives and received an insiders view of all the work that goes into staging a major event like CNN’s Presidential Primary Debates.

Cory True ‘09, a junior politics major from Augusta, Maine (and guest student blogger), had the opportunity to interview two students about their experiences working the debates.

In his first interview, Cory talks with Mark Grasso ‘10, a sophomore politics major. Mark started his week working to transform Sullivan Arena into a debate venue. He then moved on to assisting the CNN marketing staff with installing signage around campus and later to working in the green room of a democratic candidate.

Cory also interviewed Ryan Ollis ‘08, a senior politics and pre-law major from Dudley, Mass. Ryan also helped with the set up of Sullivan Arena working with the debate’s executive producer and later worked as a stand in for CNN News Correspondent John King in the debate’s “spin room.” Ryan’s highlight so far: chauffeuring around CNN’s Wolf Blitzer.

The debates are over…for today. Not to worry though, we’ll still be here tomorrow, and again for the Republican debate on Tuesday. After the long hours at work, and the short nights of sleep, the experience is all of, and more than what I could have expected it to be.

Maybe it was while standing in the midst of the various campaign supporters outside of Sullivan Arena this afternoon, or perhaps standing on the floor of the debate hall as the candidates walked out onto the stage, it may even have been the first time that CNN displayed the “LIVE — SAINT ANSELM COLLEGE” logo on the screen as I watched from the press center…but at some point I realized how lucky, and honored we all are at Saint Anselm to be able to take part in the experience. 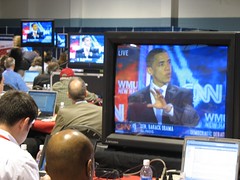 I’ve posted many photos throughout today on Flickr, which you can follow through this blog. We are now 30 minutes into round two of the debates. I’ve been in the media filing center for much of the debate, got a hot meal, and a chance to upload photos.

Be sure to check back with this blog later tonight as we move from the media filing center to the “spin room,” where the candidates and the campaigns come to speak with the media following the debate. We’ll also be posting many photos in the next day or so from some of the great photographers that are covering all angles of the debates.

We’ll be off to the spin room at 9 p.m. to watch the candidates and their campaigns conduct media interviews. Stay tuned! 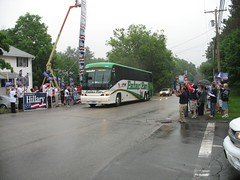 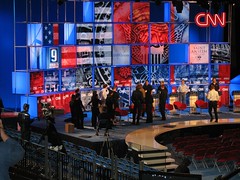