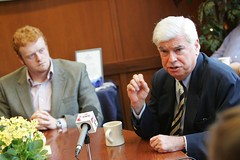 The senior senator from Connecticut had a roundtable discussion with students about current issues and his bid for the Democratic nomination for president. Following the discussion Dodd taught Professor Fitzpatrick’s business and society class. Local media along with Connecticut news channel 8 and 30 reported on Dodd’s stop at Saint Anselm College.

Dodd shared his appreciation for New Hampshire and its voters. “I am grateful to New Hampshire and Iowa, so my voice can be heard,” Dodd said. With his fundraising low compared to Democratic frontrunners, he said New Hampshire is the place where he can relay his message to voters.

During Dodd’s 10-minute speech on his background and why he should be our 44th president, he said that his 26 years of experience in the House and Senate will help him because “people believe that experience has value.”

Students at the Coffee with the Candidates asked Dodd about his thoughts on the war in Iraq, immigration, and the issue of frontloading the primaries. Matt St. John ‘09 asked if Dodd had concerns about the new arrangements of states during the primary. Dodd said that New Hampshire and Iowa are very important because “of their lead time between the other states that makes New Hampshire more relevant because if you can do well in New Hampshire you will do well in California.”

“We should address it in a rational way,” Dodd said on the issue of immigration. Lauren Chooljian ‘10 asked Dodd about border control and immigration. “Employers should pay a large price for illegal workers because it will eliminate some illegal immigration, as they will be unable to work here, and that is one of the top reasons why people come to this country,” Dodd said.

After the small group discussion, Dodd moved to the NHIOP Auditorium to teach students during Prof. Fitzpatrick’s business class. The topics of debt and social security were discussed.

“Social security will not be there for you as a sole source of income, but it will be there,” Dodd said to the students. Dodd said if he were elected president he would work hard to decrease the per household credit card debt, that is currently on the upswing throughout the country.

Dodd said he has a chance to win because people want change. “We need to build a leadership to bring us together, and I can do that.”