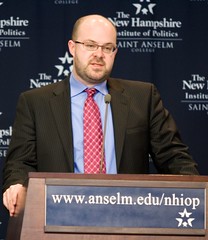 In this podcast, we feature a recent New Hampshire Institute of Politics lecture by Dr. Damon Linker, author of the book, The Theocons. Dr. Linker’s essays and reviews have appeared in The New Republic, The Wall Street Journal, National Review, and The Weekly Standard. Previously, he served as a speechwriter for former New York City Mayor Rudy Giuliani.

The subject of Dr. Linker’s lecture is “Taking the Religious Test: The Case of Mitt Romney.” For a related news item, please visit the NHIOP Web site.

Saint Anselm College’s debate team is making the rounds of tournaments and bringing home trophies. Their topic for the year is federal policies regarding energy from renewable sources.

In the Northeast Regional Championships, these three student debaters reached the semifinals. Pirrello and Thorspecken closed out the second round, again bringing home first and second places.

“To close out two final rounds in three weeks is a really special accomplishment for the students,” says debate coach Dave Trumble.

Tournaments are coming up at Central Michigan University, and the team is practicing for the final tournament of the year, the National Forensic Association National Tournament at Berry College in Georgia in April.

Update 2: The debates have been scheduled for June 3 and 5, 2007. For more information, visit this blog entry.

Update: The debates have been moved to the first week in June 2007. Debate sponsors CNN, WMUR-TV, and the New Hampshire Union Leader decided to move the dates to better accommodate the schedules of presidential candidates and to provide the best possible program for a nationwide audience. The exact dates of the debates will be posted to this blog when they are known. [see related blog entry]

Saint Anselm College will once again take a leading role in the election of the next President of the United States, college President Fr. Jonathan DeFelice, O.S.B., announced recently.

This spring, in partnership with CNN, WMUR-TV (our local ABC affiliate), and the New Hampshire Union Leader, Saint Anselm will host two presidential primary debates at the Dana Center. Each production will be televised live on CNN and WMUR, and will feature Republican candidates Wednesday, April 4, and the Democratic field Thursday, April 5.

“As a liberal arts college with a mission to engage students and citizens in the civic life of our nation, we are thrilled to showcase once again our great college and our Benedictine hospitality on a national stage,” Fr. Jonathan said.

“We hope these debates are a preview of many more campus events designed to help voters navigate the important vetting process that characterizes New Hampshire’s first-in-the-nation primary,” he said.

Although the debates will occur during Holy Week, they will not interfere with liturgical or spiritual obligations.

“One might see this convergence of events as an opportunity to highlight two of Saint Anselm College’s greatest strengths: its Catholic identity and its commitment to democracy in action,” he said.

In 2004, Saint Anselm was the venue for the last Democratic presidential debate before the New Hampshire Primary, in partnership with WMUR, the Union Leader , ABC News, and Fox News Channel.

To get a feel of what hosting a presidential primary debate is like at the college, watch the video included below from the 2004 New Hampshire Primary.