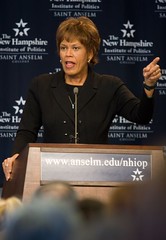 Award-winning WBZ-TV (CBS 4) journalist and humanitarian activist Liz Walker spoke to a capacity crowd at the New Hampshire Institute of Politics (NHIOP) on January 23 about her efforts on behalf of Sudanese women.

Walker is co-founder of My Sister’s Keeper, an organization that supports the enterprise projects for women in Sudan through economic development, health care, and educational projects.

During her lecture, Walker showed a brief excerpt from her documentary, A Glory From the God, the story of one woman’s inspiring leadership in the movement against genocide in Sudan. Walker has traveled to Sudan three times since 2001, most recently visiting the Darfur region, where more than 300,000 people have been killed and more than two million displaced in what is considered an international humanitarian crisis.

Walker was a news anchor for WBZ-TV for more than 25 years and has recently used her journalism experience to make a great impact in the local and global community. She has produced a number of award-winning documentaries, including the independent documentary on Sudan titled In the Lion’s Mouth, by which she earned the 2002 Edward R. Murrow Award, and Friends Like These that she produced for WBZ-TV and was recognized by the Gabriel Awards.

Listener Note: This podcast includes an excerpt of Liz Walker’s NHIOP lecture. During the live lecture, Walker previewed a short excerpt of her documentary video and then took questions from the audience (not included in the podcast).

In The News: Ossoff and Spiliotes in USA Today

As the political scene heats up, Saint Anselm College political experts are offering their thoughts on the candidates, the issues, and the controversies to a national audience.  Barack Obama’s political resume may seem a little thin to some and in “The big question about Barack Obama,” USA Today asked if his experience is enough to qualify him to be president. Dean Spiliotes, research director of the New Hampshire Institute of Politics, told the newspaper: “Lyndon Johnson had a long career in Congress before becoming president, but history considers his White House record mixed because of the Vietnam War.”  Spiliotes said, “What really matters is your temperament and your ability to make good decisions.”  He said voters “make their decision at a very intuitive, gut level…. They have a mental checklist of what a president looks like, sounds like, and acts like.”

New York Senator Hillary Clinton recently announced she would be exploring a run for the White House and USA Today ran a cover story Jan. 22, “Why some Democrats worry that she can’t win.”  Elizabeth Ossoff, psychology professor, said Hillary “doesn’t fit the mold.”  She predicted “a difficult but very interesting race. A lot of things are going to get brought up, and people are going to have to face their opinions.” Ossoff also said Clinton will have to change her cold, hard-edged image in order to let people “see her and get to know her as a person.”

Fr. Jerome Joseph Day, O.S.B., offered his benediction to a crowd of 600 during Martha Coakley’s inauguration ceremony Wednesday, Jan. 17. Fr. Jerome joined his friend and former classmate as she was sworn in as Massachusetts’ first female attorney general. During the ceremony at the North Adams Museum of Contemporary Art, Fr. Jerome recounted fond memories and prayed for God to give Coakley “insight and skill.”

Fr. Jerome recalled when as first graders they dressed as saints on All Saints Day; he was Saint Joseph and she was “dressed as Saint Martha of Bethany holding a feather duster because she was the patron saint of all those who clean up.” Martha had been cleaning up Massachusetts for years as Middlesex district attorney, Fr. Jerome said, and will continue to do so as attorney general.

“You have blessed with intelligence and knowledge. Give her now the insight and skill to defend and protect the citizens of this great and noble state under the laws enacted by their Legislators.” — Invocation by Fr. Jerome Joseph Day, O.S.B.

Written by Laura Rossi · Filed Under

Much of Saint Anselm College’s news content is available by subscription. Visitors may subscribe to receive news updates in their e-mail box or through RSS (Really Simple Syndication) each time we update our Web site.

So now you can follow your favorite sports team, read about newsworthy happenings on campus, or listen to a podcast interview or guest lecture — all delivered to your desktop at your command.

For directions on how to subscribe, visit our RSS Subscription Page.